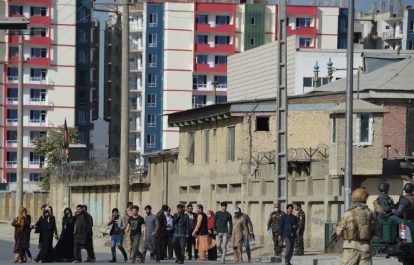 Welcome to the monthly e-bulletin of the South Asia Media Solidarity Network (SAMSN). The next bulletin will be sent on December 15, 2017, and your inputs are most welcome. 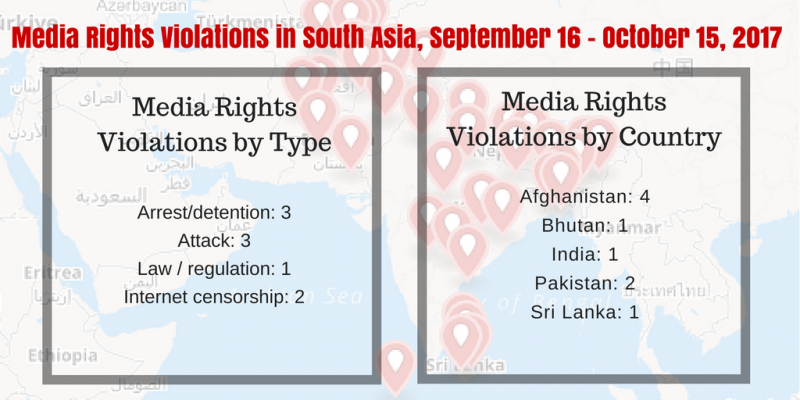 Read more about the #endimpunity campaign on the SAMSN Digital Hub and the IFJ website.

During the #endimpuntiy campaign in 2017, the IFJ and the Afghan Independent Journalists Association (AIJA) demanded justice for 73 journalists and media workers killed in Afghanistan since 1994 and an end to impunity for crimes against journalists.

The Afghan Ministry of Interior Affairs is currently investigating 172 cases of violations of journalists’ rights after a committee was constituted in 2015 to review 700 such cases since 2000, recommending the investigation and follow-up of a total 427 cases. Yet, after two years of investigations, there has still been no practical action for justice. The committee noted that among the 427 cases, security forces were found responsible in 401.  The cases include 60 killings, 46 serious injuries, 222 assaults and beatings, 84 arrests, 29 abductions and 238 threats, insults and others. Read more here.

Two men armed with guns, explosive materials and suicide jackets stormed Shamshad Television station in Kabul at 10:30 am on November 7, killing a front gate guard and injuring 22 media workers and journalists. Shamshad TV’s security guards engaged the attackers at the entrance to the main building and opened the back door as a safe exit for the majority of employees. Afghan Special Forces helped the security guards kill both attackers and end the siege in less than three hours. The channel’s live broadcasting resumed two hours later with presenters with injured hands describing the attack. The Islamic State of Iraq and the Levant (ISIL, also known as ISIS) has claimed responsibility for the attack. Read more here.

Lanka e News a UK-based website that often publishes reports critical of the Sri Lankan government was inaccessible in Sri Lanka on November 8. The site was blocked after it published a report online alleging corruption by the Office of the President in a deal relating to the purchase of warships. The website said that ‘the Telecommunications Regulatory Commission of Sri Lanka (TRCSL) which is under the President has ordered ISPs to block people in Sri Lanka accessing our website’. The TRCSL has made no comments on this. Read the IFJ statement here and Free Media Movement’s statement here (Sinhalese) and here (English); and Sri Lanka Working Journalists Association’s statement here (Sinhalese, PDF).

5. WhatsApp and Telegram blocked in Afghanistan

The Afghanistan Telecommunications Regulatory Authority (ATRA) directed the Internet Service Providers (ISPs) and telecommunication service providers to block Telegram and WhatsApp in Afghanistan reportedly for “security reasons”. The letter by ATRA, dated November 1 and signed by an official of the regulator, directed the blocking of the two services “without delay” for a period of 20 days. Both WhatsApp and Telegram provide encrypted messaging facilities. Read more here.

Journalistic activities and distribution of newspapers in the Baloch region of the Balochistan province of southwestern Pakistan have been halted following threats from militant groups. More than a dozen Press Clubs including those in Chaghi, Kalat Gwadar, Panjgur, Kharan, Dalbadin, Sarawan, Hub, Wandar, Uthal and Bela in Balochistan have been shut down indefinitely. The situation is a result of various incidents in recent days targeting the media.

Ahmadullah Sarkand, the broadcast manager of Radio Killid, and Bismullah Watandust, a journalist with Radio Shyba, were detained by the National Directorate of Security (NDS) in the last week of October in Afghanistan. Provincial police claimed that Watandust was detained on October 25 for his Facebook post about arrested cricket player Samih Yousuf that ‘provoked people against the government and police’. The police registered a case against him. The reason behind Sarkand’s detention in the last week of October has not been clarified. Read more here.

In all, 22 media workers across the Asia-Pacific have lost their lives this year. We grimly expect more before the year draws to an end. This is not fatalistic. It’s a brutal fact. On average, we lose one of our own every ten days… As we mark the fourth International Day to End Impunity for Crimes Against Journalists, the other statistic that we know too well is that 19 of these 22 recorded killings is likely to go unpunished. Too often there is poor investigation, sluggish follow-up and a culture of political and business sponsored media killing. That has to change. Read more.

Nirmala Pokhrel, a local journalist in Tsirang working for Kuensel, faces libel charges by a woman for making a post on Facebook that the latter battered and mistreated her stepdaughter. In response to the alleged libel charge against her by the Tsirang police on August 17, Nirmala Pokhrel submitted a three-page justification stating that on June 17, she posted a Facebook status stating that a woman was ill-treating her stepdaughter in a town below Damphu, Tsirang. However, their identities were not revealed and they do not know each other. Read more.

‘Defending journalism: how national mechanisms can protect journalists and address the issue of impunity – a comparative analysis of practices in seven countries’, a new global study by International Media Support (IMS), analyses the efforts to safeguard journalists in seven countries where environments of conflict and instability challenge the ability of journalists to produce good, in-depth journalism. The seven countries in focus – including Pakistan, Nepal, and Afghanistan from South Asia – were selected for analysis because they showcase a varied range of responses to improving the safety of journalists. Read more and download report.

Impunity in the murders of journalists can be an intractable cycle stretching over a decade or more, according to the Committee to Protect Journalists’ 10th annual Global Impunity Index – a ranking of countries where journalists are murdered, and their killers go free. Seven countries on this year’s index have been listed every year since the index launched a decade ago. Among the 12 countries in the index, three are from South Asia: Pakistan, Bangladesh and India. Read more.

Article 19 has launched a new guide to UN standards on the safety of journalists, setting out the commitments States have made to prevent, protect against, and prosecute attacks in UN HRC resolution 33/2. The guide not only details the concrete actions States must take to ensure the safety of journalists but sets out how UN human rights mechanisms should be used by civil society to hold States to account against these commitments. Read more and download report.

Newspapers in the Nagaland state of India issued a joint statement condemning the harassment of media houses and journalists in the state. “Nagaland newspapers are united and resolute in our stand against all coercions and threats to function freely as the fourth pillar of a democratic society,” the newspapers said. Editors and publishers of the Nagaland Post, Eastern Mirror, The Morung Express, Nagaland Page, Tir Yimyim, Capi and Ao Milen issued the joint statement. The newspapers also urged various sections of the society to “enable a free and vibrant fourth estate, which is the only means to publicly confront all forms of political, economic and social suppression”. Read more here and read the statement here.

14. Pakistan blogger says he was tortured by state (BBC)

A Pakistani blogger who went missing earlier this year has applied for asylum in Britain after alleging he was tortured by a “state intelligence agency” during his disappearance. Aasim Saeed was one of a group of five liberal social media activists who were abducted in Pakistan in January 2017 before being released after several weeks. The Pakistani military has repeatedly denied any involvement in the case. Saeed claimed that prior to his abduction he had been involved in running a Facebook page critical of Pakistan’s military establishment. Read more.

Pakistan blocks 210 URLs, many of which are considered blasphemous under Pakistan’s Penal Code for hosting content related to the controversial “Draw Mohammed Day” campaign. Geopolitical power dynamics appear to be reinforced through the blocking of such sites run by ethnic minority groups. These are some key findings of the study carried out by the Open Observatory of Network Interference (OONI) and Bytes for All Pakistan to examine internet censorship in Pakistan through the collection and analysis of network measurements. Read more.

The Maldives is tightening its grip on the media and freedom of speech by using the broadcasting regulator to silence and intimidate journalists, Transparency Maldives warned, as the government pushes a draft law that could see newspapers and TV stations temporarily shut down or fined. Transparency Maldives condemned the government for proposing a bill that would merge two existing media watchdogs and “expand its sphere of state control on print and social media as well”. The proposed Maldives Media Commission could now order print and online outlets to make corrections, issue warnings, and impose fines of up to MVR100,000 (US$6,485) for repeated violations. Read more.

The situation in South Asia is worse still. Every year, the IFJ highlights the cases of a few countries from around the globe where impunity for crimes against journalists is rife, and there are always at least two countries from South Asia. The dire situation as it exists for journalists in Pakistan, India and Afghanistan asks one question: is there democracy and a rule of law in these countries? Although the number of journalists killed in Nepal, Bangladesh, Sri Lanka and Maldives are comparably low, impunity is also a big issue. Read more.

On the morning of November 5, G Balakrishnan (Bala), an independent editorial cartoonist, was arrested in Tamil Nadu, India, for a cartoon he posted on social media criticising the district administration and Chief Minister. He stands accused of “obscene representation” and defamation, under Sections 67 of Information Technology Act and 501 of the Indian Penal Code which deals with obscenity in online publications. Read more.