Access Denied: An introduction into the world’s longest communications shutdown 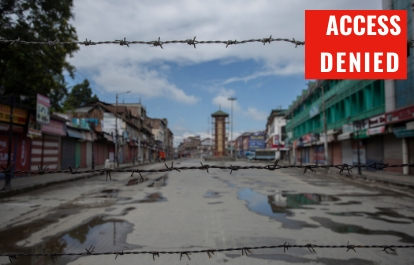 An introduction into the world longest communications shutdown.

It has been 245 days since the start of the complete communications blockade in the Kashmir Valley. As the world goes increasingly online in an every tightening lockdown and stringent physical distancing to combat the deadly novel coronavirus or COVID19 sweeping across the globe, a glimpse into the world’s longest Internet shutdown in Jammu and Kashmir (J&K) might offer some lessons in adversity and innovation, led by Kashmiri journalists.

This extraordinary internet shutdown began on the night of August 4, 2019, on the eve of the abrogation of Article 370 of the Constitution of India which granted special status to the state of Jammu and Kashmir (J&K). The days before this momentous step were marked by unease and suspicion triggered by thousands of security forces being marched into the Kashmir Valley, already one of the most militarized zones in the world. Rumours of cross-border clashes and terror strikes were rife, and verifiable facts were few on the ground. On the morning of August 5, the few that had access to dish TV watched in shock the proceedings of the Indian Parliament which not only abrogated the special status of J&K and stripped it of even its limited autonomy, but also rendered inoperative Article 35(A) which allowed the State Assembly to define ‘permanent residents’ and confer upon them certain rights, including that of land ownership and access to government jobs. The same day saw the downgrading of the state of J&K into two union territories: Jammu and Kashmir and Ladakh.

The unprecedented and total communication blockade now made sense: anticipation of possibly violent protests against the assault on the identity of a state that has long had a fractious relationship with New Delhi. Amid a shutdown of the Internet, landlines, mobile phone and even postal services, several political leaders including former chief ministers of the erstwhile state were put under house arrest, movement was restricted. Free flow of information to and from J&K was severely hampered, with journalists being unable to report the biggest story of their lifetime. With all lines of communication down, they were unable to gather, verify or disseminate the news. Surveillance and control marked the information that trickled in and out of the Kashmir Valley, and freedom of expression was put on the block.

The media in Kashmir is no stranger to conflict, having walked the tightrope for about three decades since the armed insurgency broke out in 1989. Treading a delicate line between the narratives of the state, the security forces, separatists and armed militants, Kashmiri journalists have held high the flag of independent journalism. Despite intimidation, indiscriminate use of draconian public security laws, threats, a parcel bombs, physical attacks, pellet injuries and even killings, the vibrant Kashmiri media has resisted pressure and striven to keep balance. Since 1990, as many as 22 journalists have been killed, most of them in targeted killings. From the killing of Lassa Koul, Director of the public broadcaster Doordarshan in 1990 to the shooting in 2018 of Shujaat Bukhari, editor of The Rising Kashmir, journalists have paid the ultimate price demanded of their profession.

India has the dubious distinction of being the world leader in Internet shutdowns, and J&K is the forerunner in this race, having had 180 shutdowns since 2012, an average of almost two shutdowns per month and the longest running in any democracy. The shutdowns follow a pattern, triggered by civil unrest and an official response. In 2010, following mass protests triggered by the killing of a teenage student, and in 2016 following mass protests after the killing of militant leader Burhan Wani by security prolonged shutdowns were particularly challenging for the media, but local journalists did a commendable job of telling the story, with immense professionalism and courage.

However, the ongoing communication blockade and control of independent media in Kashmir has been one of a kind. There has been vice-like grip on the narrative of ‘normalcy’ and promised ‘development’ of J&K which has been promoted in large part by the so-called national or ‘mainstream’ India, particularly the raucous television channels. This façade however has time and again been belied by voices of anguish, despair and alienation from the ground that intrepid Kashmiri journalists have been amplifying in the face of tremendous challenges and at great risk to themselves. Alleged human rights violations including mass detention of youth, pellet injuries, scarcity of basic supplies and health care, have been difficult to report, given the lack of access. Journalists in rural areas and remote corners of the state, women journalists and freelance journalists are even more vulnerable and lack professional support systems.

The body blow to the media in J&K comes at a time when the independent media was beginning to flourish. Born in the mid-1990s during the height of militancy, at a time when the state controlled the narrative, it was the independent Kashmiri media that emerged as a credible force to reckon with, several dailies, weeklies and magazines that consistently took a non-partisan stance, facing flak from all sides of the conflict. With the economy  in shambles, publications struggled to break even with no corporate backing or local sponsors. Government advertising, both from the Centre and state, was conditional on toeing the official line. Those proprietors and editors who refused to shape content to comply with directives found that advertising revenue fast dried up. Yet, despite these privations, the burgeoning Kashmiri publications, including digital portals, were finally coming into their own. Professional unions and associations and the newly opened Kashmir Press Club were steadily building a hard-won professional identity. Until August 4, 2019.

How have journalists in J&K coped with the stupendous challenge and managed to continue to tell their stories in the face of all the odds? How do they cope with the restrictions: of excruciatingly slow 2G internet, of ‘whitelisted’ and ‘approved’ websites and no social media? How will the media community in Kashmir report on the COVID19 pandemic, and how it affects ordinary Kashmiris? These stories of courage, innovation and resilience debunk the façade of ‘normalcy’ and business as usual and provide a ray of hope in a bleak landscape of control and censorship.