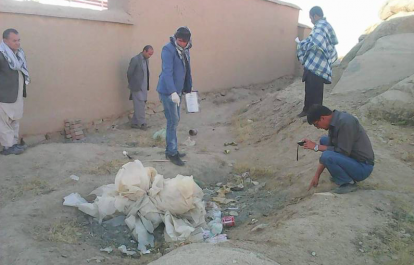 The International Federation of Journalists (IFJ) joins its affiliate the Afghan Independent Journalists Association (AIJA) in strongly condemning the bomb attack on Nasim Radio station on Wednesday, October 12 in Nili, the provincial capital of Dykundi province in central Afghanistan. The IFJ demands an immediate investigation into the attack in order to bring the perpetrators to book.

On Wednesday evening, Mohamad Reza Wahidi, owner of Nasim Radio was assaulted by the two men who knocked on his door. He collapsed after he was hit on his head and threatened at gunpoint and told to refrain from broadcasting the news. He was also warned that his family and son would be harmed if he continued his reporting. On the same night the offices of Nasim Radio were damaged in a bomb attack.

Nasim Radio was the first private radio station established in Dykundi Province in 2011 and has faced constant pressure from local officials as a result of its critical reporting.

The attack on Nasim Radio is the latest in a string of attacks on the media the most recent being the assault of Afghan Times editor-in-chief Abdul Saboor Sarir in Kabul on Sunday, October 9.

Rahimullah Samandar, AIJA President said, “The last ten days have been filled with violence across the country, and AIJA will seriously follow all incidents demanding immediate actions from government side to bring those responsible to justice.”

According to information received by the IFJ, the National Security department was informed about the incident at midnight but failed to respond in a timely manner.

The IFJ said, “Amidst targeted violence and armed hostilities and the resultant loss of innocent lives that the country has seen in the recent past, a free press can shine the light of truth and inform the public about ground realities. The authorities in Afghanistan must do all their power to ensure that those who attack the media are held accountable for their actions, and journalists can carry out their duties without fear.”