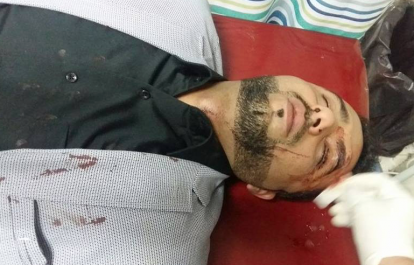 The International Federation of Journalists (IFJ) joins its affiliate the Afghan Independent Journalists Association (AIJA) in condemning the violent attack against the Afghan Times editor-in-chief on Sunday, October 9 in Kabul. The IFJ and AIJA demand an immediate investigation into the attack, and bring those responsible to justice.

On Sunday evening, Abdul Saboor Sarir, editor-in-chief of the Afghan Times, was attacked by three men at gun point as he returned home in the Khwaja Bughra area of Kabul city. The assailants stopped Sarir, attacking him, taking his vehicle, laptop and cell phones. The attack took place as Sarir returned from the Kabul-based English newspaper, 3.5 kms from the Ministry of Interior.

During the attack, Sarir sustained head injuries, but is now in a stable condition. Following the attack he said: “I was on my way to home when three gunmen stopped me. They attacked me, beating with guns on my body and face and I got injuries on forehead and face. They told my brother that they would kill him if he resisted or inform the police at the moment.”

However, this is not the first attack against Sarir. He is repeatedly threatened. Earlier this year, a group of people tried to abduct him at gunpoint, but when a police vehicle appeared on the road and the kidnappers escaped. Sarir said that he has repeatedly requested security from law enforcement agencies, but to no avail.

Rahimulah Samandar, AIJA president said: “AIJA leadership believe the attack on Afghan Times senior news management is attack on press freedom and whole media sector in the country. This and other repeated cases in one week show most horrible situation. AIJA is seriously following the case and call on Afghan officials to implement recent policy signed with AIJA and Journalists federation, taking more responsibility and better measure for journalist’s security.”

The IFJ said: “The situation for the media in Afghanistan is quickly deteriorating, which is becoming a huge concern. We join AIJA is condemning the recent attack on Saboor Sarir, and demand immediate and swift action from the local authorities. The media in Afghanistan is coming under increased attacks and immediate steps need to be taken to support and guarantee the safety of the local media.”