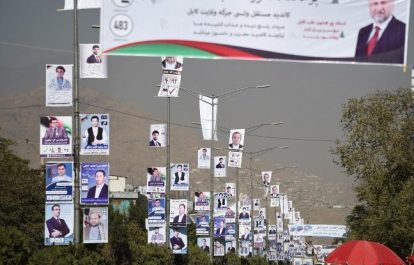 As Afghanistan prepares to go to the polls on October 20, concerns have been raised about the access that provincial journalists will have at polling stations. The International Federation of Journalists (IFJ) and its affiliate the Afghan Independent Journalists Association (AIJA) urge the Independent Election Commission (IEC) to guarantee media access to polling stations during voting.

AIJA expressed deep concern over the lack of IEC will to allow local journalists to cover the elections and noted that the issue could raise concerns over transparency in the elections.

The IFJ said: “Attempts to block the media from covering the upcoming elections in Afghanistan raise serious concerns access to information and transparency of the election processes and voting. The Independent Election Commission needs to take immediate steps to ensure journalists and media across Afghanistan have easy access to cover the elections.”

Posters of candidates for the upcoming elections in Afghanistan. Credit: WAKIL KOHSAR / AFP