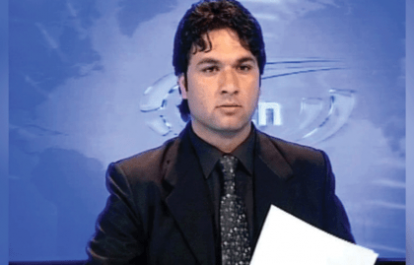 Hamid Saighani, a prominent journalist for Ariana television network, was killed in a bomb blast on a minibus in western Kabul on November 13. The International Federation of Journalists (IFJ) and its Afghanistan affiliate, the Afghanistan Independent Journalists Association (AIJA), strongly condemn the attack and call on the international community to better assist in securing the safety of all Afghan media workers.

Saighani was reportedly killed, along with one civilian, in the explosion nearby the Taliban checkpoint in the Dasht-e Barchi area of Kabul. Shortly afterwards, the Afghanistan Journalists Center (AFJC) confirmed the death of the journalist. Saighani’s wife, Fawzia Wahdat, posted “I lost Hamid” on her Facebook page the same day.

However, unconfirmed sources told the Khaama Press Agency, that Saighani may not have died in the bus explosion, but was instead allegedly assassinated in northern Kabul.

According to the AIJA, Abdul Razzaq Hamdard, the director of radio broadcasting in Afghanistan’s Nangarhar province, who was in Kabul to investigate allegations of Taliban beatings at the AIJA office, was also wounded in the incident.

Zabihullah Mujahid, the chief spokesperson of the Taliban’s interim government, tweeted that one person had been killed and two wounded, with investigation already underway on the case.

On November 15, the Islamic State regional branch, Islamic State-Khorasan Province (IS-K), claimed responsibility for the attack. IS-K representatives said they allegedly planted several bombs on the bus and declared the death toll to be 20 people, contrary to the Taliban’s earlier statement.

The group have been active in the area following the Taliban’s takeover in mid-August, with a rise in terror attacks reported in recent weeks. Taliban officials reported that a total of 600 IS-K militants have been captured and more than 36 killed in counter-terrorism operations within the last three months.

Saighani is the fourteenth journalist or media worker to have lost their lives in 2021 alone, with no justice for a single case. At least seven journalists have been killed in Afghanistan due to their profession since the beginning of the Taliban’s takeover in August, with many more suffering intensifying threats, harassment, intimidation and violence.

The AIJA said: “The AIJA condemns the incident and calls on the perpetrators to refrain from attacking civilians, including journalists, and called on the security forces to pay special attention to the lives of civilians, especially journalists and media workers.”

IFJ General Secretary, Anthony Bellanger, said: “The safety of all Afghan journalists and media workers is gravely threatened under the Taliban regime, with increasing levels of intimidation, harassment and violence from both Taliban militants and other extremist groups. The IFJ expresses its condolences to Saighani’s family and strongly condemns the attack, which is a dire blow to press freedom. The international community must do more to fight impunity for crimes against journalists and ensure the safety of journalists in Afghanistan.”