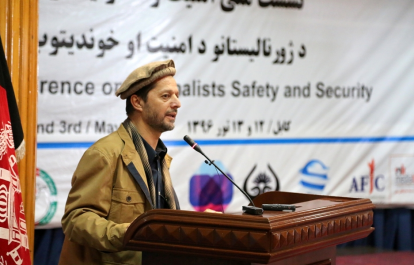 Fahim Dashti, a veteran leader of the Afghanistan National Journalist Union (ANJU), was killed in Panjshir province on September 5 during a clash between the National Resistance Front of Afghanistan (NRFA) and the Taliban. The International Federation of Journalists (IFJ) and its affiliates ANJU and the Afghanistan Independent Journalists’ Association (AIJA) express deepest condolences and sadness at the loss of a respected fighter for media freedom in Afghanistan.

The 48-year-old former chief executive of ANJU had recently taken up the role as the chief spokesperson for NRFA and had joined forces in the north-eastern Panjshir province. He was killed in the Dashtak area of ​​Anaba district along with NRFA’s General Abdul Wodo Zara, the nephew of Panjshir resistance leader Ahmad Massoud – almost 20 years to the day he nearly lost his life in a suicide attack. Just a few days earlier Dashti told Afghanistan’s NDTV: “If we die, history will write about us, as people who stood for their country till the end of the line”. It is reported that he had refused the offer of joining the government with the Taliban.

The Panjshir Valley lies in the Hindu Kush mountains, approximately 90 miles (145km) north of Kabul and has been mostly safe from Taliban forces due to its mountainous terrain. The Taliban said on September 6 that the group had “completely captured” Panjshir, the last stronghold in Afghanistan against the hardline Islamist group, after days of fighting.

Dashti was known as a powerful champion for a free media and a key voice in the collective of journalists, the Federation for Afghan Journalists and Media Entities established since 2012. On September 9, 2001, he was badly injured in an al-Qaeda suicide bombing along with anti-Taliban leader, Ahmad Shah Massoud. His son, Ahmad Massoud now leads the NRFA.

Dashti founded a newspaper in Kabul after the US-led invasion in 2001 and provided regular updates on Twitter on the conflict in Afghanistan right up to his death. He was also a contributor to the IFJ’s South Asia Press Freedom Report and had been instrumental in recently leading ANJU’s successful bid to join the IFJ as an affiliate member in 2021.

The ANJU said: “With great sorrow and regret, one of the prominent figures of the Afghan press family and a well-known man of the country passed away forever. Fahim Dashti has been active, effective and successful in the field of journalism for nearly three decades in difficult conditions.”

ANJU said Dashti worked with the union for eight years as its executive director and general director and did significant work for the family of the Afghan press.

The board of directors of ANJU said : “ It expresses its condolences for the martyrdom of Fahim Dashti, former president of ANJU and one of the best Afghan press families in the country in the last three decades. We deliver our condolences for his family and the family of the Afghan press.”

An IFJ affiliate leader in exile told IFJ: “Fahim was a good friend and strong colleague struggling with us closely to fight for press freedom and freedom of expression in the past 21 years. We had a difficult time to protect journalists’ rights. It is shocking and sad news, a big loss for all of us.”

AIJA described Fahim Dashti as one of the best journalists and defenders of journalists in the country in the last 30 years.

It said: “AIJA considered Mr Fahim Dashti a wise journalist, with good morals and very patient in the face of professional problems. His absence is a great loss to the Afghan media community and is will be impossible to fill his place.”

IFJ general secretary, Anthony Bellanger said: “The IFJ mourns the loss of Fahim Dashti as a brave voice, a fighter for press freedom and mentor to many. His death is a great loss for both the Afghanistan and international journalist community. It is indeed a sad day.”