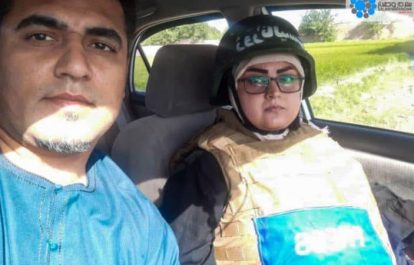 Taliban militants shot at a car carrying journalists Shakib Shams and Storio Karimi on August 1 in the Pol-e Malan area of Herat Province. The International Federation of Journalists (IFJ) and its affiliates the Afghan Independent Journalist Association (AIJA) and Afghanistan’s National Journalists Union (ANJU) remain gravely concerned by the increased security threat on journalists in the country and call for both government forces and the Taliban to cease targeting civilians.

According to AIJA, on August 1, Taliban militants fired on the car of Shams and Karimi as they reported on fighting between Afghan National Security Forces and Taliban militants. Shams is a reporter with Salam Watandar while his wife Karimi, also works for of Pajhwok Afghan News. After militants shot at the car, the journalists were briefly abducted and taken to the militant’s self-proclaimed district governor.

It is alleged that Taliban leaders questioned the journalists, checked their contacts and mobile calls and released them after 20 minutes. “They released us once they were sure that we were journalists and we had visited the area just for news reporting,” Shakib Shams told AIJA. The journalists were released through the mediation of Zabihullah Mujahid, a Taliban spokesperson. According to the ANJU, the couple is now very likely to flee their home out of fear of potential future attacks.

Large numbers of civilians, including journalists, are living in fear as fighting escalates in Afghanistan’s western province of Herat. The Afghanistan Independent Human Rights Commission (AIHRC) reports that since the Taliban’s offensive commenced in early May, many government employees, journalists, activists, tribal elders, and religious figures have been targeted or killed.

On July 26,four Afghan journalists – Bismillah Watandoost, Qudrat Soltani, Mujib Obaidi, and Sanaullah Siam – were arrested by Afghanistan’s National Directorate of Security (NDS). Danish Siddiqui, an Indian photojournalist with Reuters, was killed in crossfire while covering a battle between Afghan security forces and Taliban militants in Kandahar province on July 16. On July 14, AIJA reported that Fazlullah Erfan, the editor-in-chief of Gag-e-Islah radio programs, was seriously injured in an explosion targeting a police vehicle in Jalalabad.

AIJA said: “The leadership of the AIJA, while appreciating the non-harassment and early release of journalists by the Taliban, called on the parties involved to provide accurate and timely guidance to journalists enter their area for news- reporting.”

ANJU said: “ANJU is concerned for the increased insecurity of the journalists amid the escalating violence in Afghanistan.”

The IFJ said: “The attack, abduction and violence on civilians, including media workers, during this time of war is an affront to international humanitarian law. We therefore urge all combatants in Afghanistan to refrain from targeting journalists and media workers.”