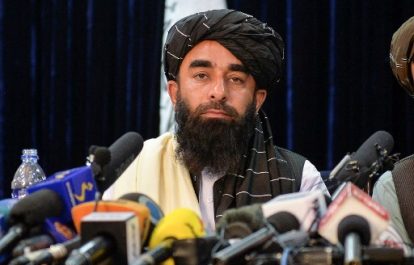 Taliban militants carried out search operations in homes of at least three employees of German public broadcaster Deutsche Welle (DW) and a freelance journalist and interpreter on August 18. The International Federation of Journalists (IFJ) urges for the necessary evacuation of media workers at critical risk in Afghanistan and asks the international community to expedite all evacuation and rescue operations.

According to a press statement issued by the DW, houses of at least three of its staffers, who have been reporting from Afghanistan for years and are well known in Afghanistan, were raided. It reported that many DW staffers are living in grave risk.

“With the Taliban takeover, the lives of DW employees and their families in Afghanistan are under acute threat,” the DW statement said. The DW statement further cautioned that just working for a western broadcaster was sufficient reason for Taliban militants to target them. DW sent contact details of its staff to the German Foreign Ministry for necessary evacuation. None of the DW employees were in their home during the militants’ search.

The Afghanistan Independent Journalists Association (AIJA), an IFJ affiliate, also reported that Ariana TV cameraperson Mahmoud Naimi and Pajhwok News cameraperson Babrak Amirzadeh were beaten up by Taliban militants in Jalalabad, in Nangarhar province, on August 18 as they reported on a protest against the Taliban takeover in Afghanistan. The AIJA also informed that Ahmad Navid Kavosh, a Khorshid TV journalist, was beaten up at Hamid Karzai airport while trying to interview a Taliban member.

The intimidation and attacks on journalists have taken place despite reassuring messages towards the press by Taliban spokesperson Zabihullah Mujahid during his first press conference on August 17, following the Taliban occupation of Kabul a day earlier.

IFJ monitoring of the situation on the ground, and through the many requests for emergency support, reveals panic and fear amongst Afghanistan’s media community. This has been contrasted with a brave commitment to reporting by many journalists who are continuing to document and assess the unfolding situation. Tolo News went to air on August 17 with women journalists and presenters, including one who interviewed a Taliban official.

Although Taliban spokesman Zabihullah Mujahid announced a new Taliban support of a free media in Afghanistan during his first press conference on August 17, the situation on the ground remains tense and traumatic for both domestic and international media.

With an estimated 40,000 people endeavoring to flee the country, some activists have called for calm to allow the critical cases to be assessed and safe passage negotiated. On August 18, the US military announced an additional 4,000 troops would soon arrive into the country and a a policy to extend its stay beyond August 31.

Meanwhile, IFJ affiliates from around the world are continuing to send messages of solidarity and support to their colleagues in Afghanistan at this time.

The IFJ said: “The fear and the anxiety is real with the scenes and reports coming out of Afghanistan. While it is clear that not all media is at risk right now, the IFJ has grave concerns for the safety of many. Despite the words from the Taliban that it will respect a free media, it is a risk that many understandably are not prepared to take. These media workers must be afforded safe passage to leave the country quickly. The international community and all governments who have had a vested interest in Afghanistan in the past two decades must stand up to the responsibility to protect media as vital human rights defenders and get these people to safety.”