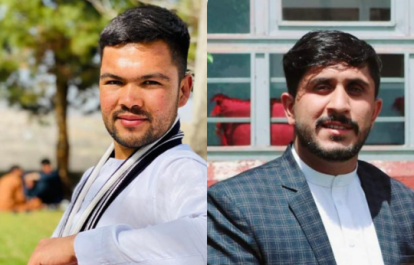 Two Afghan journalists, Ali Akbar Khairkhwa and Jamaluddin Deldar, have reportedly disappeared from Kabul, with their whereabouts unknown since May 24. The International Federation of Journalists (IFJ) urges the Taliban to urgently investigate the journalists’ disappearance and bring the perpetrators to justice.

Members of Khairkhwa’s family reported that the journalist had been missing since departing for the Kote Sangi area of Kabul’s District 5 to report and attend university classes. Khairkwa’s mother and brother contacted the Taliban authorities, suspecting their role in the journalist’s abduction, however, the Taliban denied involvement.

Deldar’s family alleged that the radio executive was arrested by members of the Armed Forces of the Islamic Emirate of Afghanistan on May 24, but did not know the reason for his arrest. Islamuddin Sanjar, of Gardiz Voice Radio where Deldar worked, claimed that Deldar remains in the custody of Taliban forces.

A statement published on May 30 on the radio station’s Facebook page said, “Jamaluddin Deldar, responsible for Gardiz Voice Radio, has been in Taliban prison for nearly a week. Silencing the media’s voice is a violation of other laws. He should be released as soon as possible.”

Omaduddin Dawran, a Pashto writer, has also been reported missing on social media.

The Taliban’s Ministry of Interior Affairs, responsible for law enforcement and civil order, announced an investigation into the cases of the missing journalists. “The issues which you have mentioned are under investigation. Whenever the investigation is finished, we will share it with you,” said Ministry spokesman Abdul Nafay Takor.

Since the Taliban’s takeover in August 2021, attacks on Afghan journalists and media workers, including imprisonment, harassment, and assault, have significantly increased. An estimated 1,000 journalists have fled the country since August, with threats, harsh restrictions, and economic collapse leading to mass closures of media outlets. In the latest South Asia Press Freedom report 2022-22, the IFJ documented 75 media rights violations, including 12 killings and 30 arrests, in Afghanistan from May 2021 to April 2022.

The IFJ said: “Contrary to the Taliban’s public commitment to protect freedom of the press and freedom of expression, incidents of harassment, attack, detainment and abduction of journalists have risen significantly following the Taliban’s takeover in August 2021. The IFJ urges the Taliban to immediately investigate the disappearance of journalists Ali Akbar Khairkhwa and Jamaluddin Deldar, bring the perpetrators to justice and increase efforts to safeguard journalists and media workers in Afghanistan.”