Amid political crisis, a ray of hope for beleaguered Pakistani media 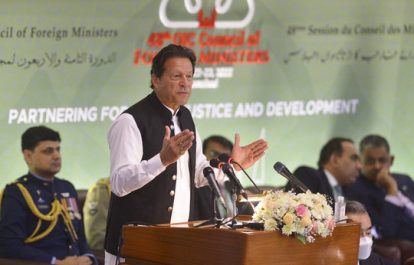 A no-confidence vote against Pakistan’s Prime Minister Imran Khan could see the end of a three-year term widely considered the worst for Pakistan’s media in decades, writes Adnan Rehmat.

Pakistan is currently undergoing a political crisis that has a major bearing on the state of free speech and media rights in the country. Imran Khan is battling to remain in power as prime minister, facing a tense vote of no-confidence in parliament brought against him by the opposition. Whether Khan manages to cling to power three years after assuming office or is ousted, the outcome of the political confrontation holds immense interest for the media industry. This is because Khan’s three-year legacy in power is synonymous with the worst conditions for media in Pakistan for decades.

These have included at least 16 journalists killed in the line of duty in the period; a staggering two-fifths of media jobs – 8,000 out of 20,000 – wiped out, according to the Pakistan Federal Union of Journalists (PFUJ), largely due to lifeline public sector advertising for media industry cut up by over half by Khan; and one of the most extensive crackdowns on dissent by any government that has seen media freedoms erode significantly on his watch.

The years 2020-21 were so bad, Reporters Sans Frontieres ranked Pakistan 145 on its 2021 World Press Freedom Index of 180 countries, a regression, and also included Khan in its international list of press predators, saying “…the last sanctuary for free speech and freely-reported news and information, is being subjected to increasingly draconian censorship measures by Khan’s government, while troll armies harass and vilify all journalists and bloggers who dare express criticism, automatically labelling them as anti-Pakistan, anti-military and… anti-Khan.”

Under the Khan government, journalists have found themselves particularly targeted, not just by his ministers and spokespeople, but by the prime minister himself. On the public campaign trail to mobilize his supporters against the vote of no-confidence in March, Khan accused the media of being patronized by his political opponents and funded by international sources to destabilize his government. An alliance of major media representative associations was incensed and demanded he provide proof or apologize. Khan’s ministers and his party’s troll armies have been routinely hounding journalists, including two of the most prominent women journalists Asma Shirazi and Gharida Farooqi.

In 2021 the government tried to push through a proposal that would have merged all media regulators into a single body; a proposal that PFUJ said would have amounted to a ‘headquarter of censorship’ with powers to establish a special media trial court to hand down punishments of jail terms or steep fines. This was successfully thwarted. Just weeks before the vote of no-confidence was moved against him in March 2022, Khan struck against the media again. He amended the already controversial cybercrime law, criminalizing dissent, making it easier to convict journalists for defamation and announcing a five-year jail term for those convicted. This measure has drawn wide censure and rejection as a draconian anti-media project.

Paradoxically, what amounts to a landmark achievement, in 2022 Pakistan became the first country in Asia to accede to the emphasis of the UN Plan of Action on Safety of Journalists and Issues of Impunity to legislate for guarantees of protection from harm for journalists and other media practitioners when the Sindh province passed a landmark local law aimed at keeping journalists in its jurisdiction safe. Under the Pakistani constitution, the country’s four provinces can legislate their own laws on most state subjects. This was followed by another milestone national law on the safety of media practitioners by the Khan government that also seeks to combat impunity of crimes against journalists. But true to form, the Khan government has still not operationalized the law by either constituting the safety commissions that will enforce the laws or drafted rules of business for them.

The Khan government’s record of intimidation of journalists speaks louder than its promises of protection for journalists. It has used the PECA law to a chilling effect, especially to charge journalists and information practitioners in connection with their digital journalism and online expression. A recent report shows PECA has been the primary legal instrument for the Khan government to intimidate and silence Pakistani journalists, revealing that cases were registered against 56 per cent of the two dozen Pakistani journalists and information practitioners who had a brush with PECA between 2019 and 2021. Of those formally charged, around 70 per cent were arrested and, of that number, over half were tortured in custody.

Khan’s continuing belligerence against the media, even during his own political tribulations, indicates that if he successfully sees off the no-confidence vote, he might become even more dictatorial against media practitioners and more intolerant of free speech and dissent. On the other hand, what would the opposition do if they succeed against Khan? In a charter unveiled days ahead of the no-confidence vote, the joint opposition parties pledged political and legal sweeping reforms they intend to pursue if managed Khan is ousted from government. This includes a promise to repeal all black media laws and measures practiced by Khan and a guarantee of broad media freedoms and protections.

For the long-beleaguered media of Pakistan, the choice of which outcome on either side of the vote of no-confidence to prefer pretty much speaks for itself.