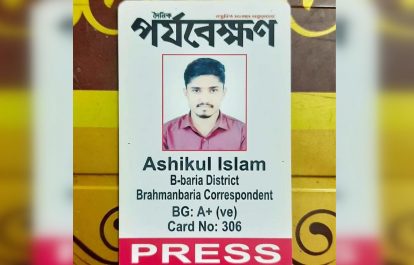 Ashiqul Islam, district correspondent of the Daily Monitor and a reporter for local daily Brahmanbaria Patrika was hacked to death in a knife- attack on the evening of January 9 while he was returning home. The International Federation of Journalists (IFJ) expresses condolence to Islam’s family and demands that the Bangladesh government investigate the case swiftly and bring the perpetrators to justice.

According to a media- report, a group of assailants, attacked 27-year-old Islam with a knife near Faruki Park in Brahmanbaria,Chattogram, at around 7 pm while he was returning home in an auto-rickshaw. All the assailants fled the scene immediately after leaving Islam seriously injured.

Locals took the journalist to Sadar Hospital where he was later declared dead.

The police soon arrested Raihan Mia alias Sohan on suspicion of killing the journalist. Raihan accepted responsibility. The police are still investigating the reason behind the attack and details of others involved in the killing.

Islam is the first journalist killed in Bangladesh in 2023. Late last year, female journalist Shabnam Sharmin was found dead in her house in suspicious circumstances. Bangladeshi journalists are demanding an immediate investigation into the case.

Manobadhikar Sangbadik Forum (BMSF), a Bangladeshi human rights organisation, is looking into whether his profession had any link with the incident.

Bangladesh Manobadhikar Sangbadik Forum (BMSF), said: “We condemn the heinous killing of journalist Ashiqul Islam. BMSF demands the immediate arrest of all those involved in his killing.”

IFJ General Secretary, Anthony Bellanger, said: “IFJ expresses its condolences to the Bangladeshi journalists’ fraternity and joins them in seeking a swift investigation into the case and for the authorities to bring the perpetrators to justice.”