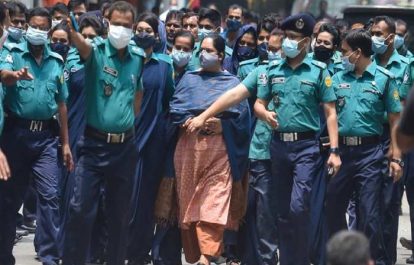 Rozina Islam, an investigative journalist affiliated with Bangla daily Prothom Alo, was harassed, confined in a room by the health ministry and arrested by police for allegedly stealing information and taking photographs of ministry documents. The International Federation of Journalists (IFJ) urges authorities to investigate her illegal detention and demands that the authorities stop illegitimately using force to harass journalists.

Journalist Rozina Islam, known forher investigative stories on the country’s response to the coronavirus pandemic, was confined in the room of a personal assistant of the secretary of the Ministry of Health on May 17 for more than five hours after allegedly stealing information. During this time, her mobile was also snatched.

The journalist, who had been given a Covid-19 vaccine on the morning of May 17, felt sick while being confined at the ministry. Despite her illness, a case was filed  at Shahbagh Police Station against herunder the Bangladesh Penal Act and the Official Secrets Act.

Following the filing of the case, she was handed over to police where she was held for a night and produced in court on the morning of May 18. Rejecting the police’s pleas for five days custody, the chief metropolitan magistrate on May 18 sent her into judicial custody until May 20.

If she is convicted, she faces up to 14 years in prison and the death penalty.

The case is one of many where Bangladesh journalists are intentionally tortured and punished on false accusations. Laws are commonly misused, including the Digital Security Act which Islam was charged under. Earlier this month, nine non-governmental organizations, wrote to Michelle Bachelet, the UN high commissioner for human rights, expressing concern over Bangladesh’s government crackdown on freedom of expression and the media.

The Bangladesh Manobadhikar Sangbadik Forum (BMSF) said: “The BMSF condemns arrest of Rozina and demands her immediate release. We are concerned for misuse of the official secrets act of 1923.”

The IFJ said: “The harassment and arrest of the Bangladeshi journalist Rozina Islam exemplifies how journalists who are critical of the establishment are tortured and punished. The legitimate exercise of force and state power is being jeopardized in Bangladesh. We vehemently condemn the offending authorities and urge that Rozina Islam’s case be immediate withdrawn.”