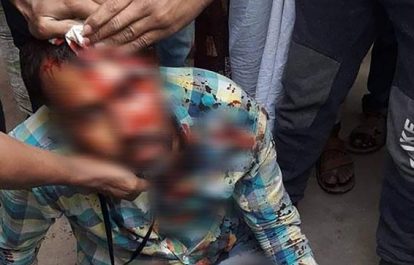 Attacks on journalists and obstruction to reporting were documented in Bangladesh during the Dhaka North and South city elections on February 1. The International Federation of Journalists (IFJ) condemns the series of attacks at polling stations by polling agents and political party supporters and calls on Bangladesh’s authorities to do more to quell election attacks on media workers in the country.

The Dhaka City mayoral and councillor elections on February 1 were fraught with suspected irregularities at polling booths, low voter turnout as well as obstruction of journalists attempting to cover polling by activists and political parties. At least nine journalists were attacked while covering the election.

Mostafizur Rahman Sumon, from Agami News, received head wounds when he was attacked with sharp weapons by alleged supporters of AL-backed councillor Md Hossain Khokon. Prior to the attack, Sumon was taking photos of AL activists gathering in Rayer Baazar, Bangladesh’s capital. Khokon subsequently shifted blame according to bdnews24.com, stating those who attacked the journalist were wearing his election symbol, but were not affiliated with him. On February 5, Bangladesh Rapid Action Battallion arrested five men suspected of attacking Sumon. One of the men, Rasel Hawlader is the half-brother of Khokon.

After the election, on February 3, Hasnayan Tanvir and Saiful Islam, a reporter and camera operator for Maasranga Television were investigating reports of AL supporters vandalising the house of a rival councillor who was elected in the Dhaka surbur of Badda when they were stopped by self-identifying supporters of AL councillor Aiub Ansarr Mintu. The media workers were harassed and their vehicle and camera equipment vandalised.

The Bangladesh Nationalist Party (BNP), the main opposition party, said its candidates were allegedly attacked and barred from polling centres by AL supporters. Despite questions over the legitimacy of the election results, the Bangladesh Election Commission announced on February 1, Awami League (AL) candidates, Sheikh Fazle Noor Taposh was elected as Mayor of South Dhaka and Atiqul Islam was re-elected as mayor of North Dhaka.

Allegations of corruption, all-too-regular attacks on journalists and restrictions on access to information routinely plague elections in Bangladesh. The 2018 general election in Bangladesh resulted in massive internet shutdowns between the days leading up to the election on December 27 until polling ended on December 29. Additionally, seven journalists were attacked and obstructed by activists and politicians from reporting on the polling booths in the 2018 election.

The Bangladesh Manobadhikar Sangbadik Forum (BMSF) said: “Freedom of the media is constantly being shrunk by attacks on journalists”. BMSF urged the government to ensure journalists are safe when reporting on elections.

The IFJ said: “The IFJ condemns inadequate measures taken to ensure media safety and access for reporting during Bangladesh’s recent city elections. Greater efforts are needed by government authorities to safeguard journalists from attack at polling stations to to ensure journalists can freely report. We urge the government and the electoral commission to conduct a review into the incidents highlighted by the IFJ.”