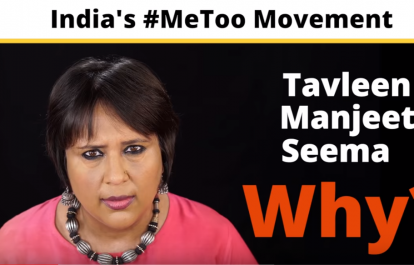 India’s #MeToo movement is a powerful social campaign led by women. But not everyone is a supporter. Veteran senior journalists Tavleen Singh, Manjeet Kripalani and Seema Mustafa have openly criticised #MeToo, dismissed it as elitist and in some cases blamed the women making the allegations. Journalist Barkha Dutt questions them in her first video column for ThePrint, India. Here is the full script:

Like millions of women, I have watched in pain, anger and dismay… As you have run down the #Metoo movement …

In your time…you have all been game changers and rule breakers.

Yet today…you mock and sneer and insult other women who are fighting.

Dear Tavleen, Manjeet and Seema: Why?

“Women threw themselves at him”, you say Manjeet, about Akbar…

“Why did you go to Suhel’s house”, you say Tavleen…to a young woman who has outed Suhel Seth’s violation.

And in the Tejpal rape case you…Seema wrote that the victim did not appear visibly agitated.

This is the language of inquisition.

This is the language of misogyny.

Like those who blame a woman’s clothes… her sexual choices… her coming home late… to rationalise rape, molestation and abuse.

Dear Tavleen… Manjeet and Seema… all three of you have mocked and dismissed #Metoo for being elite.

First. Feminism is not a binary, it’s not Either Or.

Second: What is elite about the Right to Work?

Female labour force participation is down to 27 % just two points ahead of Pakistan.

And till now 70% Indian women did not report work place sexual harassment.

Dear Tavleen, Manjeet and Seema… #Metoo is a movement for Economic rights…

Women being financially independent is at the core of feminism.

How can you of all women call it elite?

And finally… women don’t care about what you call legacy…

Or Vinod Dua a brilliant host.

Or Chetan Bhagat a chart buster.

Or Jatin Das a great artist.

Or Kiran Nagarkar a beloved author.

Or Tarun Tejpal a successful editor.

Or AIB a super funny gig.

Women do not give a toss.

Manjeet you speak of Akbar’s brilliant mind and contribution to foreign policy.

Tavleen you call Akbar flawed and ask if we should remember him as a Sexual predator or brilliant editor.

So let me answer that …

Kevin Spacey was a great actor.

NONE of it matters once grave charges of sexual misconduct and abuse surface.

Flawed is consensual affairs … Harassment… assault… abuse…THAT is a crime…

You may have had to fight harder than millennial women…and maybe that’s why you are angry.

Dear Tavleen, Manjeet and Seema: Why?