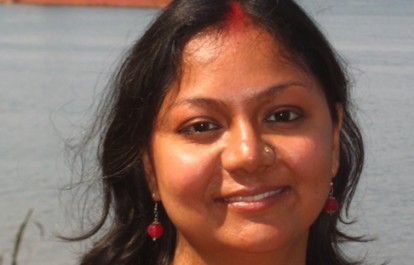 According to reports, Mandal, a producer at Rajya Sabha TV, mysteriously fell to death from the balcony of her eighth floor flat at a housing society in Vaishali. Her neighbors heard her scream late night, discovered her body in the basement and rushed to hospital with her husband where she was declared brought-in dead.

Mandal lived with her husband, a three-year-old daughter and mother-in-law in the flat at the Mahagun Mosaic and the whole family was at home that night, according to police, who have not ruled out murder and has registered a criminal case for further investigation. The police stated that the balcony of her flat had been found broken thus indicating towards a murder.

Mandal had recently returned from a London trip with her husband, who worked with British Council Division. She joined Rajya Sabha TV in 2011 from a English news channel NDTV where she worked for more than five years as producer.

Purnachandra Rao, the vice-president of the AINEF, said: “The government should order the probe on the mysterious death of Mandal without delay.”

The NUJ(I) Secretary General Prasanna Mohanty said: “The delay in nailing the accused creates suspicion about the process of police investigation.

The IFJ said: “The circumstances under which the journalist died points towards a possible murder and we urge the Indian police to investigate the incident thoroughly.”