This year the IFJ will celebrate World Day for Decent Work on 7 October by highlighting the advantages of collective bargaining. 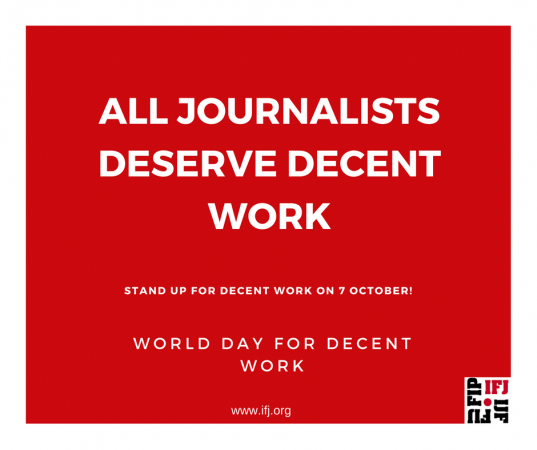 The UN and ILO recognise freedom of association and the right to collective bargaining as fundamental human rights.

According to the ILO collective bargaining improves wages, reduces inequality and helps overcome the discrimination faced by workers based on gender, disability or ethnicity.

Official statistics in the USA, show workers covered by collective agreements earn up to 27% more than their non-unionised counterparts. For young workers the figure can be as high as 38%. Collective bargaining also helps reduce the gender pay gap – with unionised women workers earning up to 31% more. In Russia, workers covered by collective agreements earn on average 10 per cent more than other workers in similar jobs.

Over just the past 12 months, thanks to collective action, IFJ affiliates across the world have been able to secure improved holidays, better childcare provision, quality training and fair and equitable procedures for dealing with grievances at work among many other benefits for working journalists.

In Nepal, union action secured an increase in the basic salary while in Northern Ireland workers at the Alpha Group won an average 30% pay rise. In Australia. the union secured a new agreement at Fairfax media group protecting working conditions and giving workers an annual above-inflation pay rise.

In Ghana, a new workplace collective agreement provides for long service bonuses, annual pay rises and clothing and housing allowances. In Somalia, the union has been able to renew collective bargaining agreements despite a conflict which has severely disrupted the economy. 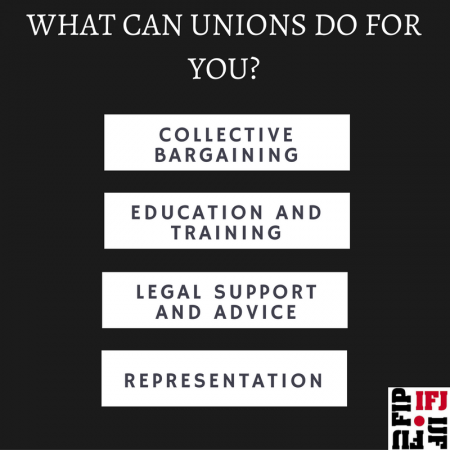 In Mexico, collective bargaining helped to secure social benefits and protections for journalists as well as avoid job losses. In Chile, unions at some of the most important newspapers in the country have negotiated a bonus for reuse of their work in other media. In France, a new national collective agreement covers new young entrants to the profession giving them improved rights, conditions and training.

A historic first national collective agreement in Palestine provides a commitment to guarantee the health and safety of journalists, fair procedures for handling disputes and grievances, additional payments for overtime and expenses, the provision of nursery care and 10 days of paternity leave.

In the UK, unions secured action and procedures for tackling bullying and harassment at the main public service broadcaster as well as higher minimum rates of pay at some local newspapers.

As the industry in many parts of the world sheds jobs and more and more journalists are forced in to freelance, on to short-term contracts or precarious forms of work so unions have turned their attention to protecting the rights of these workers. In Italy, Germany and Austria, collective agreements have helped to provide better conditions for self-employed or freelance workers. In Norway, unions won the right to bargain for freelances.

Unions are also taking action to protect being asked to pay the price for the economic crisis facing parts of the media industry.

In Canada, unions have been able to secure improved redundancy terms where companies have cut jobs. In Spain the unions have resisted attempts to scrap pay scales and defended wage rates.

The message is…whether in new or traditional, mainstream or alternative, public service or privately-owned media, whether employed or freelance, whether younger or older, male or female union action, collective bargaining and standing together makes a difference.

Join a union now! Contact the IFJ affiliate(s) in your country and be part of the world’s biggest professional organisation of journalists. 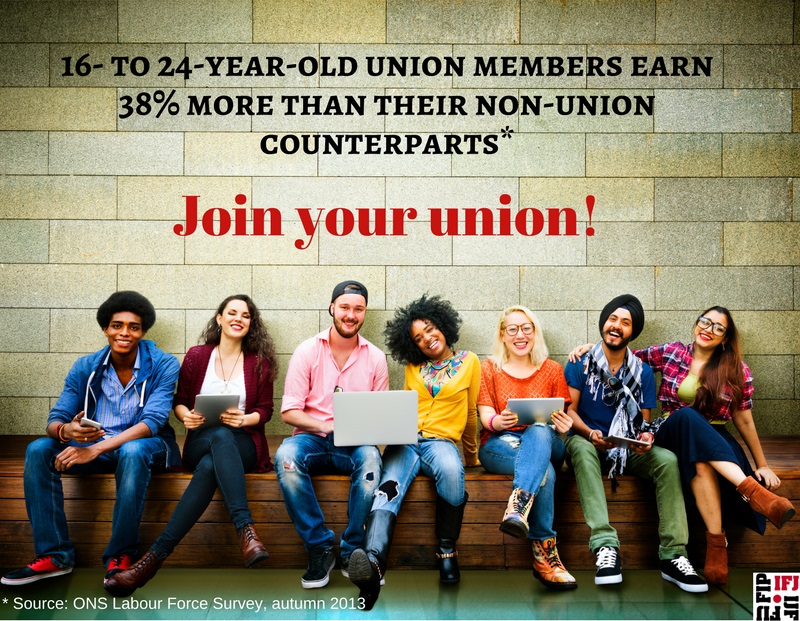