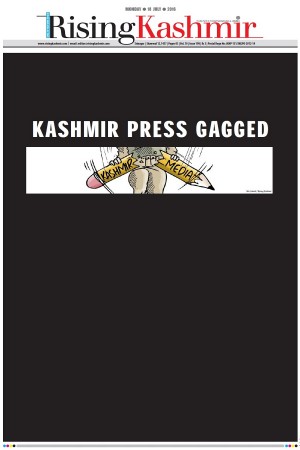 The front cover of the Rising Kashmir following the ban

The International Federation of Journalists (IFJ) joins its affiliates the Indian Journalists’ Union (IJU) in strongly condemning the ongoing media crackdown by the state in Jammu and Kashmir, in north-western India. The IFJ expresses its solidarity with journalists of Kashmir and urges the Indian authorities to immediately stop the crackdown on press freedom and allow the free flow of information.

On Saturday, July 16, Kashmir authorities banned the publication of all newspapers in Kashmir for three days, following police raids of media houses in Srinagar including the Greater Kashmir, Rising Kashmir, Daily Kashmir Images and Kashmir Observers. During the raids, police immediately halted the printing of editions and confiscated printed papers due for release. This is the first incident of a formal ban on the media from by the state government of Kashmir & Jammu. On Saturday, the government also had all cable networks taken off air, but they were returned on Saturday evening. The incidents come after mobile internet services were suspended on July 8, and remain suspended.

The government spokesperson said that ‘the undesirable step was taken to ensure peace’, following unrest which left dozens dead, with clashes between security forces and protests over the killing  of militant leader Burhan Wani on July 8. However, editors called the ban an attack on the freedom of the press and led protests in Srinagar on Saturday afternoon. A statement issued by the newspaper editors, printers and publishers of Kashmir said they strongly condemned the government’s action. On July 18, the Rising Kashmir uploaded a three-page e-paper on its website with a blackened FrontPage saying ‘Kashmir Press Gagged’ with a cartoon.

The IJU President S N Sinha, Secretary-General Amar Devulapalli, International Federation of Journalists (IFJ) Vice-President Sabina Inderjit, Press Council of India (PCI) members K Amarnath and Prabhat Dash said: “The J&K police action in name of volatile situation in the valley is an attack on the freedom of the media and unacceptable in a democracy. The fact that the police did not file any case against the newspapers goes to prove the illegality and heavy handedness of their action. The IJU demands that the police should desist from such illegal and unconstitutional actions immediately and allow the press to function unhindered.”

The IFJ said: “The formal action of the state government of Kashmir & Jammu to shut down the media for three days is a blatant attack on press freedom and freedom of expression. The government of India continues to tighten its control of freedom of expression and press, through controlling communication channels and the media, ultimately weakening democracy in India. The IFJ joins the IJU is demanding immediate action from the government to repeal the ban and stands in solidarity with the local media community.”