Clampdowns and Courage: The challenge for South Asia’s media 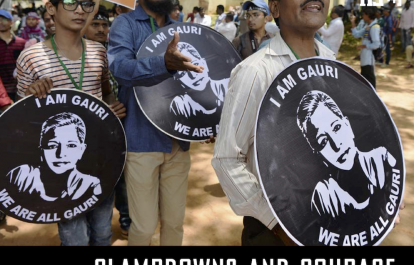 As we mark World Press Freedom Day, the International Federation of Journalists (IFJ) and its South Asia affiliates, together with the South Asia Media Solidarity Network (SAMSN) launch the 16th South Asia Press Freedom Report, Clampdowns and Courage. Just three days after ten journalists and media workers were brutally murdered in Afghanistan in the countries deadliest day for media, the IFJ’s report documents the clampdowns and violence that is continuing to take a hefty toll on the region’s media and more broadly on freedom of expression.

The IFJ said: “The devastating irony of the killings in Afghanistan happening just prior to World Press Freedom Day cannot be underemphasized at this time. The mass killing of journalists in one black day is an unspeakable tragedy to hit Afghanistan, where media workers are already under horrendous daily pressures in terms of their conditions and safety.”

The annual report, which documents the state of press freedom across South Asia, this year also puts focus on the plight of rural and small-town journalists, the flow-on impacts of the #MeToo movement in South Asia’s media and the scourge of sexual harassment impacting women journalists is covered in a special chapter featuring first person essays by women working in the region, including Pakistan, Afghanistan, India and Bangladesh.

Clampdowns and Courage documents impunity issues, underlining that the rate of conviction for killings continues to be near-zero for the region and highlights the 16-year campaign by Anshul Chhatrapati to seek justice over the killing of his father, Indian journalist Ram Chander Chhatrapati, who was killed in 2002 in India.

“Sadly, the long road to justice for journalist killings is fraught with poor investigation, tardy trial procedures and political pressure that often let the accused abscond or roam scot free.”

The brutal murder of Gauri Lankesh in India in September saw India and region come together and united in solidarity, both to condemn her murder and demand action.

In a positive development this week, the IFJ notes a significant impunity breakthrough with the sentencing of nine people in India, including the mastermind, who were found guilty for their role in the brutal murder of Indian journalist Jyotirmoy Dey seven years ago.

During the reporting period (from May 1, 2017, to April 30, 2018), the IFJ documented 35 journalist and media worker killings, including the ten killed this week in Afghanistan’s deadliest day for media in two separate incidents on April 30, 2018. The IFJ is addressing the growing safety challenges through the International Convention on the Safety and Independence of Journalists and Other Media Professionals, which it drafted and released in November 2017.

The IFJ again noted the increasing impact of internet shutdowns on press freedom in South Asia, with 97 incidents documented in IFJ monitoring during the period. India is leading the charge with 82 shutdowns, followed by Pakistan with 12.

The IFJ said: “We document the attacks, clampdowns, repression and muzzling by legal means and more. But we also pay tribute to the other factor that unites South Asia’s media – and that is courage. In the face of adversity, its media fearlessly perseveres, despite the suffering and despite increased controls and criminalisation of their craft. For these reasons and more, Clampdowns and Courage encapsulates a record of this past year and the work of many. And, most importantly, we hope it will continue to support the South Asia Media Solidarity Network to continue its campaign for justice – because that is what we all deserve.”

IFJ affiliates and members of the SAMSN network are