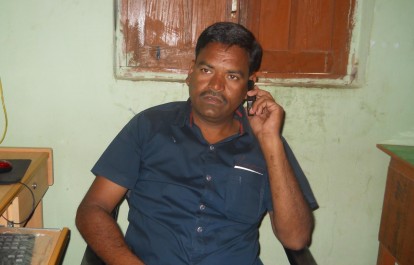 The International Federation of Journalists (IFJ) joins its affiliate the National Union of Journalists (India) in deploring the murder of a television journalist in Chatra of Jharkhand state in India on Thursday, May 12. The IFJ demands urgent action from the authorities finds those responsible and bring them to justice.

Indradev Yadav, also known as Akhilesh Pratap Yadav, was shot dead by unidentified people near his home while he was on his motorcycle. Yadav, 35, was local correspondent for Taaza TV, a Hindi news channel based in Kolkota. The assailants fired at least five shots at Yadav, two of which hit him killing him immediately.

Originally from Bihar state, Yadav had settled down in Jharkhand working as a journalist for five years and was known for his critical reporting on corruption. Yadav is survived by his wife and two children.

The NUJI has demanded Chief Minister Raghuvir Yadav immediately arrest the murderers and provide relief to the family. NUJI president Ras Bihari said: “The criminals in Jharkhand have started targeting journalists. It’s surprising that the miscreants were able to flee the scene after firing five shots. The NUJI demands immediate arrest of the murderers.”

The Jharkhand Union of Journalists (JUJ) has condemned the murder in strong words. JUJ president Rajat Kumar Gupta, General Secretary Sheo Kumar Agrawal and NUJI executive committee member Rajiv Nayanam, after visiting Chatra, said that the murder is an example of worsening rule of law in the state.

IFJ general secretary, Anthony Bellanger said: “We call on the government to immediately investigate the shooting death of Indradev Yadav in Jharkhand, India. Should the murder be proved to be work related, Yadav will be the second media worker killed so far this year in India. The IFJ express condolences to Yadav’s family, friends and colleagues.”

IFJ records note that since 1990, 97 journalists and media workers have been killed in India, making it the seventh deadliest country for media globally.