Death by stress in Pakistan 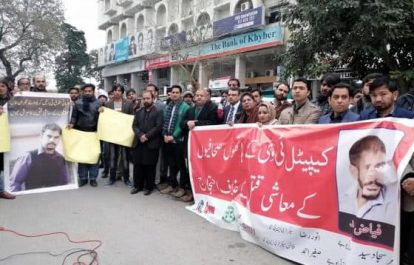 Another media worker has fallen victim of death by stress. Fayyaz Ali, who was a camera operator at news channel Capital TV, died of a fatal heart attack the day he was laid off.

According to reports, Capital TV hadn’t paid Ali’s salary for more than six – some say ten – months and he’d asked the channel’s management for his pending salaries and dues. Instead he was given a termination letter.

When he reached home, he met his landlord who demanded the pending rent, which probably added to his stress that day. He later suffered a fatal heart attack that took his life.

Ali is not the first person to die due to the stress of non-payment of salaries with several media workers dying in 2019, largely attributed to non-payments of salaries and sudden terminations.

In November, SM Irfan, a senior crime reporter and longtime member of the Karachi Press Club and the Crime Reporter Association, died from a fatal heart attack. His short obituary on NewsOne’s website, the channel he worked for, revealed Irfan suffered from high blood pressure and was stressed because as he had not been paid by his network for more than seven months.

What Irfan’s obituary didn’t say was that he had enrolled at a local university to pursue a degree in criminology that would help him to further his career as a crime reporter. Irfan’s colleagues paid tribute to him on social media, revealing the problems and stress he was going through right up to his death. Like many others in the media, he worried about paying routine bills and not being paid for months.

Both Ali and Irfan supported extended families – wife, children and parents. The question now is how will their families support themselves?

While there are reports that Capital TV has given ‘compensation’ to Fayyaz Ali’s family, will it provide his family a stipend to help them survive in the short term as they confront the many challenges ahead? Similar claims of compensation by employers in other cases have proven hollow when the promised compensation never arrives.

The big question now is had they been paid on time, would Irfan and Fayyaz still be alive today?

There is no doubt Pakistan’s media is going through tough times – perhaps its toughest, given the sheer size and impact on so many in our industry. Media owners routinely speak of “financial crunches”, invariably blaming various government policies for their shameful inability to respect worker rights and pay salaries on time, and defending staff cuts and mass lay-offs as a necessity of economic pressures.

While it’s clear that media globally are enduring similar struggles, it’s hard to verify that the massive lay-offs and unpaid salaries in Pakistan are only due to the financial crunch of digital disruption.

Wage theft or the non-payment of salaries has now become a norm for Pakistan’s media industry. Too many journalists work month after month without pay, and when they do ask for their salaries they face consequences like Fayyaz Ali, losing their jobs and sometimes their lives.

But journalists across Pakistan are now beginning to speak up and ask critical questions, not only of those running the media, but also the government which has a responsibility to support and protect a free, strong and independent media.

Looking closely at the situation it seems to work very well for media owners. They get the job done with a smaller team – and don’t have to pay their staff on time or at all!  The working conditions are the equivalent of modern slavery with media workers chained to the wheel.

Sadly, too many journalists would rather be on the job and not get paid on time than be laid-off – with many hoping that better times will come. Who can blame them?

Interestingly, the non-payment of the salaries seems restricted to lower editorial staff, while executives whose pay scales run into millions of rupees are still paid. This of course works very well for media owners, who keep making money from a business running on little or no expenses from hardworking, unpaid human resources.

In this space, media staff live in constant fear of being sacked, while Pakistan’s inadequate labour laws deter a weakened worker base from raising their voices against this injustice. It’s a vicious cycle that has consumed the lives of too many.

SM Irfan and Fayyaz Ali are not the first to die from the stress of financial problems, but the industry has been too slow in making the connection. Irfan and Fayyaz’s colleagues said they talked a lot about the stress of piling problems, unpaid school fees and health bills. Comments like ‘he died due to stress’ were often heard, but so many others are going through similar conditions that there is an ironic solidarity to survive the pressure.

Should a survey be conducted now in Pakistan, there is no doubt that the results would reveal a large number of media workers suffering from extreme stress, with a large percentage at a critical or breaking point.

Death by stress is real and it should be a serious concern for media owners who are responsible for inflicting the damage and compiling the stresses of an already tough profession.

If the families of dead journalists began working together to claim damages and compensation from media organizations for death by stress and non-payment of wages, owners may well be forced to pay much more than had they paid the salaries they were responsible to pay on time.

Right now Pakistan’s media needs a reality check. We must act urgently to improve working conditions in the industry. Media owners must take responsibility and pay salaries or face the consequences for a dereliction of duty as employers. There needs to be a stronger system to defend worker rights, the streamlining of monthly salary payments and a labour environment where workers can safely seek retribution for unpaid salaries without fear of losing their jobs.

Now is the time for solidarity. It is time for journalists to work together and speak out against the injustices that are taking the lives of too many and driving many more from our industry.

Irfan and Fayyaz should not be forgotten. Their struggle should be our resolve.

Things can still improve for Pakistan’s media industry – but only if there is a collective voice for action against this tragic backdrop.