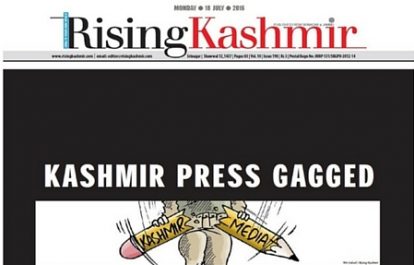 Faisul Yaseen, political editor of the English daily Rising Kashmir published from Srinagar, provides an insider’s view of how error 404 is crushing journalism in Kashmir.

Every now and then Kashmir finds itself in an age when Larry Page, Mark Zuckerberg and Jack Dorsey were not even born.

The Valley often witnesses internet shutdowns or clampdown on social networking websites, the brunt of which is borne by everyone including the students, researchers, and traders. However, for people in the business of journalism in general and in printing and publishing in particular, e-curfew is almost a death blow.

While the journalist community in Kashmir has been living with curfews from time-to-time for the past three decades, the communication curfew is the latest phenomenon. In this day and age when most of journalists’ communication with officials and their sources is through email or Facebook, how handicapped they must become during internet blockade can only be imagined.

Following last year’s killing of Hizb-ul-Mujahideen commander, Burhan Muzaffar Wani, an influential foreign media organisation asked a journalist friend of mine, Shahnawaz Hussain to write an in-depth feature for them. So he came out his curfew-bound Srinagar downtown home and left for Tral area of south Kashmir, home of the Hizb commander. On the way, Hussain was roughed up by the Jammu Kashmir Police, Indian paramilitary forces and Indian Army soldiers at several places for coming out in curfew.

Though he had bruises all over his body, Hussain did all the leg work, met all the necessary people, and did all the research that would have made his story a good one. On his return home, he sat all night to draft the story, writing and re-writing it to leave a good first impression on his editors and the media outlet he was about to begin a journey with by freelancing from Kashmir.

Unfortunately, the government had other plans.

Hussain’s story was never published thanks to the internet clampdown by the Chief Minister Mehbooba Mufti-led Peoples Democratic Party-Bharatiya Janata Party coalition government in the State.

“It really hurt,” he says. “Not the beating of the Indian forces but   my story not being published for no fault of mine.” Dejected and heartbroken, Hussain was lucky though, lucky to have been freelancing.

While the media outlet he was freelancing could afford to drop the story, local newspapers like ours have no such options. We have to come up with a complete edition of our newspaper and epaper 365 days a year. Lack of internet access cannot be an excuse for not publishing.

We at the Rising Kashmir have often been at the receiving end of the communication curfews imposed by the successive governments in the state. The backbone of our newspaper is the reporting team, both the reporters working at our main office in Srinagar, and correspondents working in the districts in north, south and central Kashmir, Jammu, Ladakh, Pakistan administered Kashmir, Delhi and Islamabad.

While the news editors can get news stories filed by reporters in the Srinagar office through alternate means during internet clampdown, there is no way for them to get the news stories from district reporters, or reporters from Jammu, Ladakh, Muzaffarbad, Mirpur, Gilgit Baltistan, New Delhi or Islamabad.

There have been times, when our outstation reporters, in the absence of internet in Kashmir, had to dictate some important news stories to the reporters in our main office over phone, resulting in waste of both time and human resources.

The internet clampdown also hits the quality of our opinion pages as our edit and op-edit page editors are not able to get the articles and features of the columnists and responses of the readers.

As a result, at the time of communication curfew, the overall content of our newspaper gets hit.

The quality of content though is not the only concern. In absence of internet, the production of the newspaper, in terms of layout and designing is also adversely impacted. These days, most layout and graphic designers store their graphical illustrations in their email accounts, which they are not able to access at the time of communication blockade, thus hitting the presentation of the newspaper also.

However, at the time of internet blockade, the entire team is rendered almost jobless. I was recently having a conversation with the team and found that most of them, for securing their jobs, wanted to switch over to the print.

In the day and age of social media, the pessimism of youngsters like them, who should have been craving to become social media editors or internet editors, tells the Kashmir story.

Internet clampdown in the Valley is handicapping young Kashmiri journalists, who used to look at the success stories of Dorsey, Zuckerberg and Page with optimism.