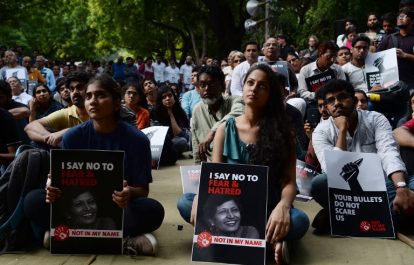 The International Federation of Journalists (IFJ) and the South Asia Media Solidarity Network (SAMSN) urged governments in South Asia to urgently roll out concrete measures to end the reigning impunity in crimes against journalists and ensure justice to slain and victimized journalists.

The IFJ and the SAMSN raised concerns over the alarming level of impunity and released a special capsule report on impunity ahead of the release of 16th edition of the annual press freedom report: Clampdowns and Courage: Press Freedom in South Asia 2017-18. The entire report will be launched on May 3 to mark World Press Freedom Day.

A total of 33 journalists lost their lives across South Asia from May,2017 to April,2018, making the region the most dangerous region in the world for journalists. Afghanistan saw the killing of 22 journalists, 10 of them in a day on April 30, 2018 whereas the world’s largest democracy, India, saw 7 killings while Pakistan witnessed 4 killings of journalists.

The IFJ said: “In most of the cases of killing of journalists in South Asia, justice is elusive. The 33 journalist colleagues whom we lost this year add to a long list of hundreds of slain journalists awaiting justice after being killed for carrying out their professional duties. The struggle for justice is a challenging process, and in many cases the process doesn’t even begin.”

Prominent editor Gauri Lankesh was among the killed journalists. She was shot dead in Bengaluru in India in September 2017; and despite repeated commitments from authorities, it took six months to nab an accused, the suspected supplier of firearms where the actual shooters are still at large.

In India, over the last two decades, more than 30 journalists have been killed as a direct result of their professional work. The Clampdowns and Courage states that the rate of conviction continues to be near-zero and the long road to justice is fraught with poor investigation, tardy trial procedures and political pressure that often lets the accused abscond or roam scot free.

Overwhelming impunity continues to characterise Pakistan’s media environment. Even as justice is awaited in the 115 cases of journalists killed since 2000, in one conviction, the higher court reversed the verdict. Aminullah Niaz, the alleged killer of Jang journalist Ayub Khattak was in 2017 exonerated by the Peshawar Court a year after he was found guilty and awarded a life sentence by a lower court.

Likewise, in Afghanistan, Bangladesh, Maldives, Nepal and Sri Lanka where conviction in the cases of murder of journalists are rare. The authorities are particularly unwilling to open investigation and prosecution, into killings from the conflict era or by religious extremists, despite efforts by the journalists unions to push for the justice.

The report, supported by UNESCO and the Norwegian Ministry of Foreign Affairs, details threats, violations and attacks on the media in the year up to World Press Freedom Day according to UNESCO’s Journalists Safety Indicators. The report is also a key tool for advocacy on issues such as press freedom, impunity and gender equity in the media in South Asia.

The IFJ said: “The alarming level of impunity in crimes against journalists is a shame for South Asia. Sadly, governments have not taken any concrete steps forward, making it riskier for journalists to carry on their professional duties. This must change. The IFJ urges all governments in South Asia to urgently set in motion special measures and mechanisms to ensure justice for killed journalists.”

Photo: Indian demonstrators hold placards with the picture of Indian journalist Gauri Lankesh during a ‘Not In My Name’ protest in New Delhi on September 7, 2017. Indian activists, politicians and journalists demanded a full investigation on September 6into the murder of Gauri Lankesh, a newspaper editor and outspoken critic of the ruling Hindu nationalist party whose death has sparked an outpouring of anger.Credit: Sajjad Hussain/AFP