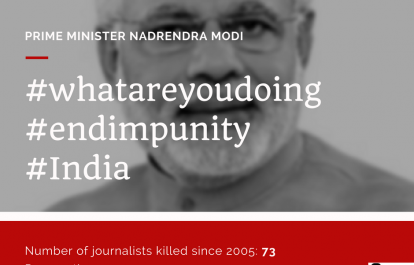 India is the largest democracy in the world, with a robust judiciary and vibrant, independent media. Yet, its dismal record of punishing the murderers of journalists has made it one of the focus countries for this year’s End Impunity campaign. With 73 murders since 1990, without justice in most of the cases, impunity is rife in India.

Corruption, crime and politics, which are interlinked beats, are the deadliest for journalists, especially those from small towns and rural areas and the regional language press.

The lack of prosecutions in the gruesome murder of Jagendra Singh in Uttar Pradesh is a glaring example. Singh was a stringer for several Hindi dailies, also launched a Facebook page Shahjahanpur Samachar (Shahjahanpur News) and posted write-ups on corrupt deeds and alleged rape by minister Ram Murti Verma. Singh was set alight in his home on June 1, 2015 allegedly by the police, and he died due to burn injuries a week later. Singh’s family registered a criminal case against Verma, his four associates and four policemen accusing them of the plot to kill Singh, but not much progress has been made on the case. The alleged involvement of a minister and the local police is sufficient reason for the investigation to be moved to the Central Bureau of Investigation, but this has not happened.

Uttar Pradesh has been the most dangerous state for journalists in the past two years, with three other journalists besides Jagendra Singh killed: Sanjay Pathak, beaten to death in August 2015; television journalist Hemant Kumar Yadav, shot to death in October 2015 and Tarun Mishra, bureau chief of the Jan Sandesh Times shot dead in Sultanpur on February 14, 2016.

Journalists in other small towns were also targeted when their stories got too close to uncovering corruption and illegal activities. The half-burnt body of 40-year-old investigative reporter Sandeep Kothari, was found in Balaghat, Madhya Pradesh two days after his abduction. He was reportedly killed for his extensive reporting on illegal mining, land grab and the sand mafia. Likewise, Indradev Yadav, aka Akhilesh Pratap Yadav, 35, was shot dead on May 12, 2016, by unidentified people near his home in Chatra, Jharkhand. Yadav, a local correspondent for Taaza TV, a Hindi news channel based in Kolkota, was known for his critical reporting on corruption.

These new cases add up the pile of unsolved cases of murder of journalists going back more than two decades since journalists’ rights organisations began systematically recording the killings. In the Kashmir Valley, in the State of J&K, journalists have borne the brunt of attacks from the security forces and militants. None of the targeted murders has been solved, right from the height of the militancy on April 10, 1996 when the body of Ghulam Rasool Sheikh, editor of the Urdu-language daily Rehnuma-e-Kashmir and the English-language weekly Saffron Times, was found in the Jhelum River up to January 31, 2003 when Parvaz Mohammad Sultan, chief editor of a local news agency News And Features Alliance (NAFA), was shot dead by unidentified gunmen.

In the central Indian state of Chhattisgarh intimidation of the free press has been severe. Veteran journalist Sai Reddy was hacked to death in a public place in the town of Basaguda in December 2013. His killing was the fifth of a journalist in Chhattisgarh in a period of three years. The fact that no one has been prosecuted for the murder, has contributed to the continued and escalating intimidation and harassment of journalists in Chhattisgarh which goes completely unpunished.

Journalists in rural areas and small-towns, especially those working for regional language media, appear to be more vulnerable to intimidation and attack and even being killed for their work. Many take grave risks to expose crime, and the nexus between the law enforcement agencies and politicians. Geographical location, class, caste and social network are as significant as job security and backing by the employer. Freelancers, stringers, and those on precarious contracts were more at risk, and their killers more likely to get away with murder. Ironically, it is these intrepid freelance journalists and stringers who uncover major scams and corruption where corporate-backed media houses fear to tread.

That lack of action to ensure journalists’ safety bolsters impunity is clear. According the recent Committee to Protect Journalists Report, ‘Getting Away With Murder: 2016 Impunity Index’ in at least 40 percent of cases, the victims reported receiving threats before they were killed. Authorities rarely investigate threats, and almost never provide adequate security. The situation has deteriorated in 2013, with killings, intimidation, harassment and sexual violence against journalists going unpunished.

The journalist associations in India, including IFJ affiliates the Indian Journalists Union (IJU) and the National Union of Journalists (India), have been expressing deep concern at the slow progress of investigations on killings of journalists. They have been demanding a separate law for the protection of journalists and speedy prosecution in cases of murders.

This suggestion has yet to be implemented, and journalists’ safety and impunity remains a serious problem in India, not only in the insurgency prone areas but in states where law and order and governance are victim to vested interests of the powerful. To safeguard the democratic values on which India is founded, it’s essential that the Central and the state governments act to protect freedom of expression and prosecute those responsible violating it. It is essential that the Government of India take steps to increase accountability in the international forum as well. As a first step, India must submit an update to the Biennial impunity report of the Director General of UNESCO and demonstrate its commitment to bringing the killers of journalists to book.