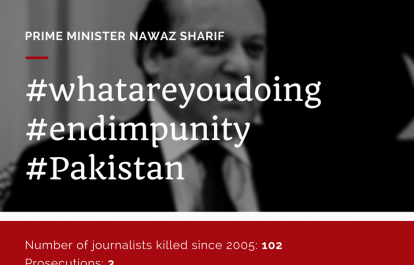 The killers of journalists mostly walk free, as Pakistan has so far recorded only three convictions. March 16, 2016 marked a rare occasion for journalists in Pakistan to celebrate the third verdict convicting a murderer of journalist when District and Sessions Court in Karak district, Khyber Pakhtunkhwa, sentenced Aminullah to life imprisonment for the killing of Jang Group journalist Ayub Khattak. The journalist was shot dead on October 11, 2013 for his reporting about the drug business in which Aminullah was involved. The conviction was successful as his family vigorously pursued the murder charges against the accused. Khyber Pakhtunkhwa and the Federally Administered Tribal Areas (FATA) have seen 28 cases of journalist murders, and none, except in Khattak’s case, have been arrested so far.

Earlier convictions were recorded in the cases of Geo News TV reporter Wali Khan Babar, killed in 2011, and American journalist Daniel Pearl, murdered after abduction in Karachi in 2002. Babar was killed in 2011 in a targeted attack sponsored by a political party in Karachi city. It is the only case after Pearl’s murder that saw justice being delivered in 2015, with two receiving death sentences and four others getting life terms in prison. However, justice did not come easy as at least five witnesses were killed during the process of investigation and trial, and an appeal by the convicts is pending in the Sindh High Court.

Another welcome development is the arrest of two suspects on January, 2016 in connection with the murder in 2014 of three media workers of the TV channel Express News in Karachi. The police arrested Tanver Nadim and Squib Ahmad Pasha, reportedly affiliated to a Taliban faction. Technician Waqas Aziz Khan, driver Khalid Khan and security guard Ashraf Arian were shot dead in an Express TV van on January 17, 2014.

Balochistan – termed ‘Cemetery for Journalists’ in the IFJ South Asia Press Freedom Report 2014 – remains the most dangerous province for journalists with 31 killings since 2007. On August 8, 2016, two cameramen – Shahzad Khan, 30, of Aaj TV and Mohmood, 26, of Dawn News, were killed in the Civil Hospital bomb blast in Quetta, the capital of Balochistan, which left 53 others dead.

A judicial commission’s report submitted in August 2015 concluded that Balochistan remains the worst flashpoint for media practitioners in the country and that the climate of fear and threats of reprisals prevent witnesses to assist the authorities in combating impunity against the attacks and intimidation. The Commission report says that in absence of evidences and witnesses, no banned militant organization or government agency such as police, local administration or any other group could be held responsible for any journalist’s killing.

Justice for killed Pakistani journalists, except Wali Khan Babar and Ayub Khattak, remains elusive. The investigation into Babar’s murder was pushed along only after the journalist communities, who also closely followed the progress of the case, mounted countrywide pressure. Impunity has taken deep root in Pakistan, particularly with the rise in terrorism after the country aligned itself with the US-led coalition against al-Qaeda and other militant groups in post-9/11 Pakistan.

The atmosphere of lawlessness in Pakistan, contributed by widespread impunity, has not only contributed to more attacks on journalists but also forced the journalists to self-censor. In many of the cases, there were reports suspecting Pakistan’s intelligence services’ involvement but the government has failed to investigate these cases and punish the murderers. With only three verdicts and one case in the court in more than 100 killings since 2005, impunity in Pakistan is at its worst.