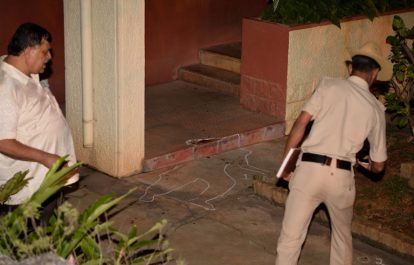 The International Federation of Journalists (IFJ) joins its affiliate the National Union of Journalists (India) in condemning the brutal killing of journalist Gauri Lankesh in Bengaluru, India on September 5. The IFJ demands urgent action from the government to tackle the worsening situation for freedom of expression in Karntaka state and calls on authorities to use every means to track down and arrest the perpetrators.

Lankesh, 55, a respected veteran journalist and outspoken critic of Hindu nationalists, was shot dead outside her home in Rajarajeshwarinagar in northern Bengaluru, Karnataka, as she returned from work. Three unidentified gunmen on a motorbike fired at least four shots at her as she entered through the gate of her home. Lankesh died at the scene after receiving gunshots to the head and chest. The gunmen fled the scene.

Local officials have said they suspected she had been under surveillance by the gunmen. Her death has been widely condemned, with Karnataka state’s chief minister Siddaramaiah calling it an “assassination on democracy”.

Lankesh edited and published a Kannada-language weekly newspaper Gauri Lankesh Patrike and wrote widely in the English media. In November 2016, Lankesh was convicted in two defamation cases by a magisterial court for a 2008 article in her newspaper alleging three MPs’ involvement in criminal activities. She was sentenced to six months in jail but was out on bail and appealing the conviction, claiming it was an attempt to silence her.

India’s Karnataka state has experienced growing intolerance against critical voices. In June 2017, the state assembly jailed two editors and fined them for publishing reports criticising the members of legislative assembly. Several other outspoken secularists and independent rationalists have also been murdered in recent years in similar circumstances. Lankesh is the second journalist to be killed in India this year, and the seventh in 18 months.

The Brihanmumbai Union of Journalists said: “The Brihanmumbai Union of Journalists expresses shock and anger at the dastardly killing of Gauri Lankesh, editor of Lankesh Patrika, in Bengaluru this evening. Gauri Lankesh has been a trenchant and courageous critic of hindutva and casteist politics. Since last November, she has been fighting her conviction in a criminal defamation case against BJP MP in Dharwad Prahallad Joshi and was out on bail. Journalists will not  be cowed down by such cowardly acts. The BUJ demands that the Karnataka government move with speed to investigate the killing and book the assailants. As it is, there has been no progress in the investigation into the death of the renowned writer Kalburgi. The failure to book the culprits will further embolden obscurantist forces in their nefarious attempts to intimidate and silence independent voices of dissent and reason.”

The Network of Women in Media, India said: “To the spirit of Gauri Lankesh, you inspire us forever. To journalists everywhere, this is a note of solidarity. We the Network of Women in the Media, India solemnly swear to uphold the values of journalism. This does not and should not need to be prefaced with good. Or courageous. Or brave. We must simply power on in the face of the greatest adversity, threats and political opposition to do what our job mandates. To be free and fair and stand together solidly behind each other to be able to rise against the tidal wave of intolerance and often criminal intimidation that surrounds us and tries to prevent us everywhere. We want to declare to ourselves and to everyone that is watching with and without malice – we will not be prevented, silenced, outdone or shut down.”

The Indian Federation of Working Journalists said: “IFWJ has condemned the brutal killing of journalist Gauri Lankesh in Banglore. IFWJ demands that the Prime Minister Sri Narendra Modi should consider implementing the “Journalist Protection Act” in the next session of Parliament.”

The Editor’s Guild of India said: “The Editors Guild of India is deeply shocked and strongly condemns the murder of Gauri Lankesh. Her killing is an ominous portent for dissent in democracy and a brutal assault on the freedom of the press. “

IFJ General Secretary Anthony Bellanger said: “The brutal murder of Gauri Lankesh is a deplorable act to silence an outspoken, fearless and critical voice. The targeting and hounding of Lankesh for her critical journalism already played out in the courts before reaching this horrific and brutal conclusion. This action must be condemned at the highest levels and strong action taken by authorities in Karnataka state as it clearly follows a deadly pattern. The spike in murders in India in recent years raises serious and urgent questions about the government’s ability to defend, support and promote the importance of press freedom.”

The IFJ demands an immediate and thorough investigation into Lankesh’s murder.

Photo: Police officials investigate the crime scene at the house of 55-year-old Gauri Lankesh, who was shot dead by unknown assailants in the porch of her home in Bangalore overnight on September 5, 2017. Credit: Manjunath KIRAN / AFP