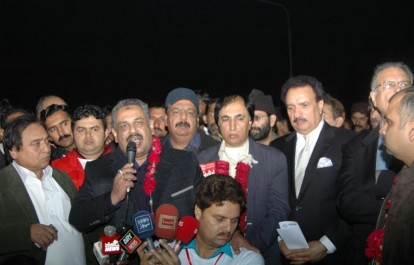 Pakistan is one of the most brutal fronts in the world for journalists, says Rana Azeem.

As a union leader in a country ranked as one of the most dangerous in the world for journalists, what do you think is the reason for the hatred against the media?

It is not only the government but the Taliban and other terrorist groups that are against the journalists because our community has been exposing them. Journalists in Pakistan are brave, knowledgeable and they do criticise government policies, they have been front runners in exposing the Taliban and their ideology. So these are the reasons but still the general public does support the media in Pakistan.

You have received death threats and your home has been shot at. Some would say that the wisest decision would be to detach yourself from your union work. What keeps you and your colleagues going?

We are committed to our cause of unearthing the truth and safeguarding the rights of our colleagues. This is not only our professional but also our religious duty to always speak truth, unearth truth and stand up against the violence on the weaker persons. We continue to face problems but we continue to perform our duties. I believe that death is in the hand of God and nobody could kill me unless my fixed time to death has reached. Firstly my strong faith to destiny is the main reason to continue with the union and secondly I know if I detached myself from the union just for these threats then perhaps no other would stand up to fight for the community. It would be a success for those who continue to threaten me which I would never accept. It is for the others to continue their commitments and perform their duties without any fear with full faith.

How much of a stronghold does the government and other criminal and terrorist groups hold over the Pakistani media? Is there much censorship and interference?

The government of Pakistan has always been making efforts to have stronghold over the media. They have been introducing certain rules to put pressures on the media houses and independent journalists to negotiate to get more favourable coverage. It was more frequent under the military regime and it  is getting weaker and weaker with the democratic government now-a-days. But still it is not completely eradicated. The Taliban used to be successful in threatening and getting control over the publications of news against them but now it has also decreased to a satisfactory level and the media is getting more free.

Along with the PFUJ, there are also many other groups (national and international) working towards the safety of journalists in Pakistan. Why do you think things aren’t getting any better?

Yes there are a number of other organisations working in Pakistan to improve safety of journalists in the country but often the worst situation is in the remote and lesser developed areas where journalists have to face pressures from the government, local leaders, terrorists and other influential agents while local journalists have no support or cover there. But it is only the IFJ and PFUJ and regional unions that reach at such places and make efforts to provide support to the vulnerable journalists. The situation is so adverse that it needs a lot of effort to improve situation to a satisfactory level. It may take many years to make things right.

Pakistan is one of the most complex fronts for journalists. Can you explain the dynamics of the media environment?

It is the working conditions that make a country or place simple or complex for journalists. The working conditions in Pakistan are unfortunately not  favourable for journalists to work with peace of mind. They have to face many challenges of pressures, threats, uncertainty of  job security, low wages which are often not even paid sometimes. Theis makes the situation most difficult for the journalists to work. As many as 133 Journalists and media workers in Pakistan have sacrificed their lives, 3100 journalists have been injured at work while many have received threats.

As a long-time unionist and media activist, what would you say has been a personal career highlight?

As a media person it has been nothing other than to fight against the hurdles coming across on the road, to unearth the truth and help others. It is not a bed of roses but a thorny way to walk. But I am still committed to continue the career as a first choice.

Bravery and the need to tell the story to the world are just some of the driving forces for journalists to go out and do the job they do. What advice would you give to fellow Pakistani journalists and correspondents?

Every successful journalist tries to follow this but it is not an easy way. Sometimes it costs one’s life. So being a seasoned journalist and union campaigner I would advise my fellow journalists that they should do their job with full honesty and  efforts but keep one thing in mind, do your work but keep security measures as a first priority. Because it is always better to do a good story than becoming a story of the past.

What is the most pressing need right now for the PFUJ and the journalists that it represents?

There are many needs, but the most pressing is that the journalists be provided  a safe and sound environment to work and they are given job security with a regular salary following the prevailing rules formulated by the government .

What will it take to bring real change for the media in Pakistan?

The Pakistani media is on the rise at the moment. A number of new organisations of print and electronic media are being established and the media is getting more mature now with the passage of time. So I am very optimistic that things would be changed in a positive way, provided we continue our efforts and with the IFJ’s continued utmost support and guidance to get through this difficult time.

Rana Azeem is the Lahore-based president of the Pakistan Federal Union of Journalists (PFUJ).