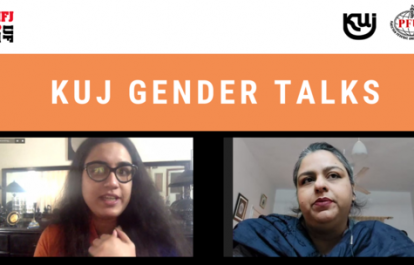 Both Shirazi and Zakir spoke about their experience working in the media, the issues they faced in the workplace, and how it was important to keep striving hard regardless of the obstacles in one’s way.

Shirazi said that gender issues are under-reported, but that does not mean you stop working on them. “We face many issues when we are carrying stories about women issues like rape and murder, and we get pressure from different sides when we do some stories. However, we stand our ground, stressing that certain issues should be highlighted. If we as journalists don’t speak up and fight to protect our content, no one else will.”

“Journalists will always be relevant, no matter how significant or strong social media becomes. Social media influencers are not journalists – they are posting content based on their own opinion or because they are getting paid for it. Journalists have to work harder to counter some of the content that spreads; content that may be good to consume but is not true,” Shirazi said.

Answering a question, Shirazi said, “There is no soft or easy beat in the media. Every beat requires equal hard work and dedication to achieving goals. Whether you are a woman or a man, you have to give your all to your job.”

Fatima Zakir said that in her career, spanning over 15 years, she has not faced any harassment, but she knows it happens and is a big issue in the field. However, she said that women journalists, like other professional women, have to work harder to prove themselves.

“It is true, women may have to work harder to prove themselves, but that is true for everyone. The media is a competitive field, and you have to constantly prove yourself, regardless of your gender.”

“People will pull you back and make you feel bad about your accomplishments, but you have to persevere,” she said. “I have learned that nothing is given to you unless you work hard for it.”

Speaking about the family issues women face even before they enter the media, Zakir said, “I got good grades in high school. My dad said, that with such good grades, why don’t you take up medicine or engineering. But I wanted to join the media. After a lot of discussions, I finally got admission into the Mass Comm department. My parents were quite disappointed that I didn’t go into science, and for many years, my mother didn’t tell anyone that I was in the media. As time passed, and they saw my by-lines and my articles, they realised it was worthwhile.”

She stresses that despite fighting on many fronts, women journalists must stick to their convictions and keep moving in the direction they want to take.

Both Zakir and Shirazi agreed that a journalist’s job is not easy – whether they work at a desk or in the field. And a woman journalist’s job is even harder. They talked about how many women journalists are harassed while covering lifestyle events. Harassment may not only be sexual, but comes in many forms.

“Recently, one of my colleagues became all shook up after covering a glitzy, glamorous event; [she] said she was harassed while trying to get some comments from a celebrity and she was so upset that she left the venue. But only after getting the job done,” said Shirazi.

Speaking of the IFJ and KUJ’s work under the IFJ’s Union to Union project, both women said it was a great initiative that made it possible for media students to gain access to professionals working in the field. Both Zakir and Shirazi said this is an extremely useful tool for the students to build a solid presence in the industry they will join after completing their degree.

“We never had this opportunity when we were students,” said Zakir. “This is a great initiative and you guys are lucky that you are connecting with people in the field. Not only will you be able to use KUJ’s platform to connect with local journalists, but you can also reach out to international journalists. You can benefit by getting a jump-start in the field by making contacts in the industry now, which most of us had to work really hard to get.”

Shirazi agreed, “This project is a good bridge between media students and media professionals. KUJ has given you a platform where you can attend sessions and training which will help develop skills that will be useful when you come into the industry. Also, being connected to the IFJ is an achievement, and you are lucky. Connecting to unions helps you to become stronger – and as students, entering the industry with connections will be a plus for you.”

The students asked both journalists many questions about issues such as gender harassment and strategies to cope in an industry that faces financial difficulties. Both speakers said that digital platforms allowed journalists to work freely, and media workers must continue to upskill and learn alongside the shifting media landscape.

Lubna Jerar Naqvi is a freelance journalist and the Pakistan Gender Coordinator of the IFJ Asia Pacific.