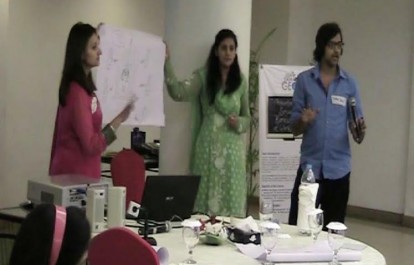 The importance of a safe working environment cannot be emphasized enough, especially with a larger number of women joining the work force. It is imperative that organizations take serious steps to protect women employees so that they can concentrate on their work and contribute to their full potential.

Fortunately, one of the country’s largest media networks, Geo TV Network was quite aware of sexual harassment even at that time as Uzma Alkarim – senior journalist and Head of Gender Sensitivity Committee Geo TV – reveals.

“Geo made the gender harassment at work policy in 2003 – shortly after its launch in 2002.” Said Uzma Alkarim. And the Gender Sensitivity Committee was formed in 2003 with Mir Ibrahim Rahman, CEO Geo Television Network and Syed Zulfiqar Ali, Head of Human Resources on this Committee.

“Geo’s CEO Mir Ibrahim Rahman has zero tolerance for harassment against women employees.” Zulfiqar Ali, Head of Human Resource Geo said. “Mir Ibrahim was the force behind this Committee and he has always asked us to take strict action against the harassers. He wants us to study each complaint and case minutely and take immediate action. We have already dealt with many cases some in which even senior people have been highlighted as the harasser.”

Now many media organizations in Pakistan are slowly catching up and have become aware of the issue of sexual harassment in the workplace. Some have formed gender cells but only Geo Television Network actually has a Gender Sensitivity Committee devoted to spreading awareness about sexual harassment and providing solutions.

This is achieved by periodically organizing workshops to train employees about how to deal with harassment and harassment claims – men also attend these workshops, especially those in important positions.

“Over the years we have been informing our employees about the policies in different ways. On joining the job they are given an orientation pack which has details about this policy. We also put up standees; notices and posters on soft boards in different departments; send regular emails and conduct in-house trainings.” Uzma said.

The ‘make the workplace safer’ campaign reminds employees that they can report harassment to a member of the Committee.

This campaign is not only about spreading awareness about sexual harassment but it also includes adopting a code of conduct for the workplace and implementing a policy prohibiting harassment, sexual or otherwise, in the workplace. A sub-committee has been formed to address and investigate claims of harassment.

“If someone wants to file a complaint we offer them both situations – to tackle it in a formal way or informal.” Alkarim adds. “In some situations some people don’t want to give a complaint in writing, so we say can sit and discuss it – this is the informal way. However, we write these complaints down for the committee to see and to help following up on the complain. Then a smaller committee is made which follows up which determines the gravity of the complain. And by law we are bound to complete our investigation in a week.”

Interestingly, the gender policy covers everyone, including trainees & interns; all outsource and contractual employees; talent and retainers; applicants and candidates; vendors and permanent employees.

“Anyone applying to the organization can also lodge a complaint against an employee and action will be taken against them.” Reiterate Zulfiqar. “We don’t ignore any complaint.”

The author Lubna Jerar Naqvi is the Head of Content (Social Media) for Jang/Geo Group based in Karachi, Pakistan.