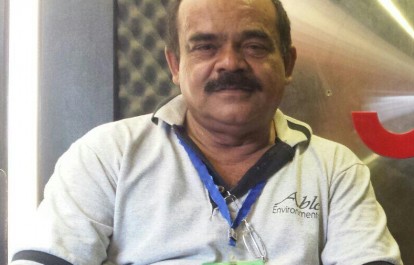 The International Federation of Journalists (IFJ) joins its affiliate the Pakistan Federal Union of Journalists (PFUJ) in condemning the murder of a GEO TV media worker in a targeted gun attack in Karachi, Pakistan on September 8. The IFJ urges prompt action to arrest those responsible and has re-affirmed its calls on the Pakistani government for decisive steps to be made against ongoing media killings and attacks in the country.

Arshad Ali Jaffery, a 45-year-old GEO TV satellite engineer, was killed as three gunmen fired at the Digital Satellite News Gathering (DSNG) van belonging to f Geo TV in Bahadurabad, Karachi.  The van’s driver Anees was also injured but is in hospital in a stable condition. The van was parked outside a department store on the evening of September 8. Two Geo TV staff, who were outside the van, escaped injury in the attack. The attackers fled the scene on motorbikes.

The injured were taken to the Aga Khan Hospital, but the technician died from his injuries. Jaffery had been working for Geo TV for several years.

The IFJ notes the continued and systematic attacks on Geo TV and its staff over the past two years. In April 2014, well-known Geo TV senior anchor Hamid Mir was shot multiple times in an attack on his vehicle in Karachi. Mir was targeted for his reporting on Pakistan’s Inter-Services Intelligence (ISI). Following the attack, two arrest warrants against Mir were registered, one in Lahore and one in Quetta for his reporting regarding the ISI and the Pakistan Army.

In November 2014, Hamid Mir was interviewed by CPJ during which he discussed the multiple attacks on Geo News. In the interview he said: “We are under attack from all directions… We cannot fight them with guns but at least we have the right to defend and right to exist and we are trying our best to survive. Our struggle is not just for our own survival. We are actually struggling for the freedom of whole Pakistani media. If we don’t survive the freedom of the whole media will go away. Today they have targeted Geo TV but tomorrow they will target those TV channels that were used against us.”

In April 2014, the Pakistan Electronic Media Regulatory Authority (PEMRA) suspended the licence of Geo News for 15 days and imposed heavy fines for its content. The suspension ordered by the Pakistan Ministry of Defence following Geo’s reporting of the attack of Hamid Mir. During the reporting, Geo News was accused of running a ‘vicious campaign’ against Pakistan’s ISI.

In the latter half of 2014, during political protests across Pakistan, staff of Geo TV were targeted in a series of direct harassments and attacks in Karachi, Islamabad and Faisalabad as they attempted to cover the protests. Geo TV’s offices in Islamabad were also attacked during the August protests.

Following repeated attacks on media staff, particularly those from GEO News, the IFJ wrote to Pakistan Prime Minister, Nawaz Sharif, and opposition leader Imran Khan calling them to quell their political cadres against targeting the media and to respect media rights.

Last year, Pakistan had the highest number of journalist killings in the IFJ annual killed list report, Trail of Violence: Journalists and Media Staff Killed in 2014.

The IFJ and the PFUJ express condolence to the Jaffery family and urges Geo TV to provide necessary compensation to his family as well as other r media staff killed on duty.

The IFJ said: “The IFJ is saddened by the death of Ali Jaffery in this brutal and senseless targeted attack. The continuing attacks against Geo TV and other media workers in Pakistan show the ongoing disregard for the media and must be condemned and actioned from the highest levels of government and the state. Pakistan’s record as one of the most dangerous countries in the world continues.”

A number of breakthroughs have been made in Pakistan this year – namely the arrest of Faisal Mehmood for the murder of Wali Khan Babar. More recently, arrests have been made following the 2014 murder of Baloch journalist, Irshad Mastoi. On September 2, it was announced that Shafqat Ali Rodani and Ibrahim Nachari had been arrested and confessed to Mastoi’s murder.

The IFJ added: “Global support and national efforts by journalists unions and media workers have been focused on arresting  the levels of violence against the media in Pakistan, but a concrete strategy is needed from government to bring the long list of killers still at large to justice. Arrests must be swift and justice must be delivered if the country is to have any hope of tackling its horrendous record of impunity.”