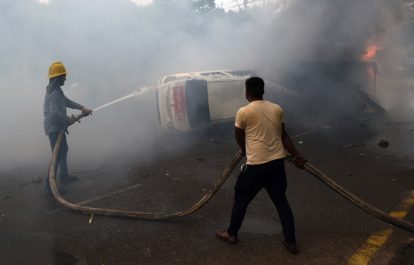 The International Federation of Journalists (IFJ) joins the National Union of Journalists (India) and the Indian Journalists Union (IJU) in strongly condemning the attacks on journalists and media property in India following a court verdict on August 25. The IFJ demands urgent action from the authorities to ensure security for journalists to carry out their duties and punishment to those attacking journalists.

On August 25, after the self-styled ‘godman’ Gurmeet Ram Rahim Singh was found guilty by a special Central Bureau of Investigation (CBI) court, on charges of rape and sexual assault of two female devotees in 2002, his followers ran amok and attacked media vehicles and journalists in Haryana and Punjab. In the violence following the verdict, about 38 Indian citizens have lost their lives and scores of others injured.

At least four outdoor broadcasting (OB) vans of media houses – NDTV, Republic TV, India Today and E24 – were toppled, damaged and burnt near the court premises in Panchkula, Haryana. Apart from this, at least 38 media personnel have registered a complaint with police regarding loss of equipment and vehicles. Reporter Rakesh Kumar and video journalist Shipendar Happy from PTC News were attacked and robbed in Sirsa, near Dera Sacha Sauda, the headquarters of Ram Rahim Singh.

NUJ (I) Secretary General Ratan Dixit said: “We demand adequate compensation to the injured journalists; and appeal to the state authorities to ensure that such incidents do not occur in the future. We also demand immediate arrest of the culprits.”

IJU Secretary General D. Amar said: “We are shocked at the inability of the Haryana police to protect the media and media equipment from such vandalism. We demand that the government immediately compensate the journalists and the channels for the damage suffered. IJU demands immediate strongest action against the culprits and their instigators to prevent recurrence of such incidents and compensate the loss of the media.”

The Delhi Union of Journalists (DUJ) and the Delhi Journalists Association (DJA) have also condemned the attacks.

The IFJ notes that this is not the first time that the ‘godman’ and his followers have attempted to silence the media. Journalist Ram Chander Chhatrapati was shot dead at point-blank range near his residence in Sirsa on October 24, 2002, months after his newspaper reported that women were sexually harassed and raped by Ram Rahim Singh. Chhatrapati’s murder is being investigated by the same CBI court that pronounced the verdict in the case of rape against Ram Rahim Singh.

The IFJ said: “The IFJ condemns the attacks on journalists and media by supporters of Gurmeet Ram Rahim Singh and urges the Indian authorities to ensure safe working environment for journalists in India amidst the growing violence and hopes for justice to be delivered in the case of 2002 murder of journalist Chhatrapati.”

Photo: One of the media vans following the riots. Credit: Money Sharma/AFP