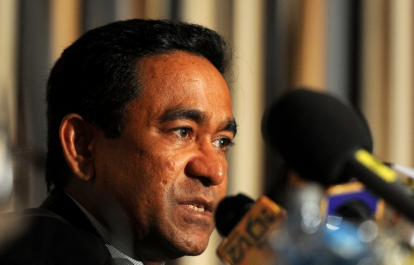 The International Federation of Journalists (IFJ) and its affiliate the Maldives Journalists Association (MJA) condemns the Maldivian government’s moves to take control of the national public broadcaster on April 29 as an attack on the democracy’s press freedom.

On April 27, the Public Service Media (PSM) Bill was tabled in the Maldives Parliament and passed with 41 votes in favor, and four votes against it. The new Act was then ratified by President Abdulla Yameen which dissolves the Maldivian Broadcasting Corporation. The President also proposed a seven person governing board.

During a brief parliamentary debate, Government MP Riyaz Rasheed, from the Progressive Party of the Maldives (PPM), the reasoned the new bill was necessary as the Maldivian Broadcasting Corporation had extensively covered a campaign to free former president Mohamad Nasheed, while ignoring the events, overseas trips and announcements of the current government.

Former president Nasheed was sentenced to 13 years imprisonment on March 14 for ordering the arrest of chief judge Abdulla Mohamed in January 2012 who was under corruption suspicions. Originally cleared of his charges in February in the Criminal Court, the country’s first democratically elected president was re-arrested by the prosecutor general on February 23 under tough new anti-terror laws, a move President Yameen says was not politically motivated.

The IFJ said: “The Maldivian media have faced a number of challenges from the government in recent months and this Act is another attempt by the Yameen government to control critics. The concept of the public broadcaster is to ensure balanced and ethical reporting in the public interest, however with the government controlling this, it will only serve as a propaganda tool.”