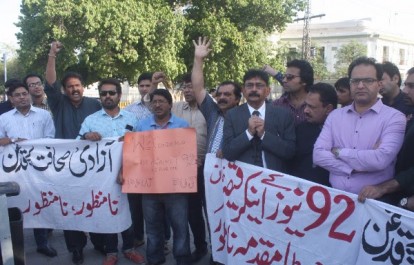 On April 29, Iqrarul Hasan, the host of popular program Sar e-Aam on ARY TV and his colleague, Kamran Farooqui were arrested on orders of the Sindh Home Minister, Sohail Anwar Siyal, after they entered the Sindh Assembly with a pistol and presented it to the speaker, highlighting poor security. Hassan was released after 24 hours in custody, but Farooqui was held in judicial custody until May 4 when he was released on bail. The charges against the two journalists include the possession of illegal arms and fraud.

In a separate incident in Lahore, police registered a case against 92 News TV’s Qaisar Khan, after he aired a program to expose the non-action of police in Okara. Khan’s team raised the non-action of police in Okara’s sub-urban area where the locals have complained of dacoits in his program ‘Andheri Nagri’. Following his arrest, PFUJ staged a protest outside the Punjab Assembly in support of Khan.

According to the president of the Depalpur Press Club eight journalists were arrested during the protests on May 4 and 5.

The IFJ said: “Journalists should never be arrested for simply doing their job. The pattern of arresting and charging journalists who expose weaknesses and wrong doings is a worrying development for Pakistan’s media. The IFJ joins PFUJ is demanding the immediate withdrawal of each of the cases and call for end the harassment of journalists in Pakistan.”