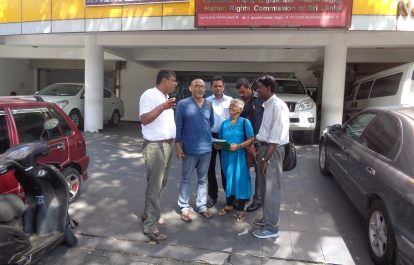 She stated this when she met the executive committee members of the Free Media Movement on Tuesday (29), who requested her to mediate to take suitable action to grant justice to journalists and media institutes that came under attack.

Complaints to the police, eyewitness accounts and information regarding the slain and assaulted media personnel play an important role in meting out justice in these cases, and if the police has not taken action on the complaints made, the Commission can take action in these instances, the Chairperson said.

The FMM handed over a comprehensive report indicating instances where Killings, Assault and Disappearances of Journalists and Media Institutes have taken place without any action being taken against such incidents. We request all civic minded parties to provide any information pertaining to Killings, Assault and Disappearances of Media Personnel to fmmsrilanka@gmail.com or to,  Convener, Free Media Movement, No 96, Bernard Soysa Mawatha, Narahenpita, Colombo 5.Sri Lanka.

The complaint made by the Free Media Movement to the Human Rights Commission has been directed through this channel.