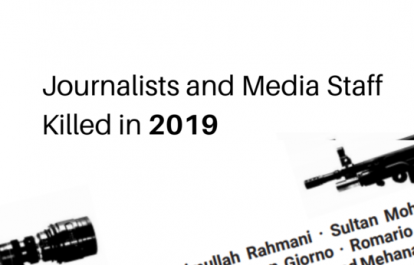 The International Federation of Journalists (IFJ) today released its annual report of killings of journalists, detailing 49 deaths worldwide in 2019.  The world's largest organisation of journalists reiterated its call  for a real commitment by governments to fight impunity for crimes committed against journalists and for media employers to provide safety training, insurance and equipment for their staff in the field.

On 31 December 2019, the IFJ published its list of media workers killed in the line of duty, showing 49 journalists killed in 2019, including three women, half as many as in previous years.

The report, published on 4 February, provides a regional analysis of the state of press safety and detailed information on the circumstances surrounding the deaths of the 49 media workers listed. Latin America is the region with the highest number of deaths (18 ), followed by Asia-Pacific (12) and Africa (9), the Middle East and Arab world (8) and Europe (2).

Two key observations emerge from the statistics. Firstly, threats, harassment, imprisonment and murder no longer take place only in countries at war. Secondly, the victims are mainly local journalists. In the majority of cases, it is articles and reports on abuses of power, corruption and crime that have led to targeted violence and killings.

For Latin America and the Caribbean, 2019 was marked by continued violence against journalists and media workers, with 18 confirmed deaths - 37% of the global total- in Brazil (2), Colombia (1), Haiti (2) and Honduras (3),  Mexico remains the most dangerous country in the region, but also in the world, with 10 murders. Journalism is largely threatened by organized crime cartels and the weakness of political power, which adds to ongoing fears for the coming years. The IFJ also deplores dozens of unsolved cases of murders of journalists in the last decade in the country.

The Asia-Pacific region saw a sharp drop in the number of deaths in 2019 from 32 to 12 in Afghanistan (5), India (1), Pakistan (4) and the Philippines (2). Yet systematic violence against the media persists. Ongoing threats to the press, lack of response from the police, failure to investigate and impunity for crimes committed, contribute to a sense of insecurity. Among the 12 killings, 8 journalists were directly targeted by gunfire. This was the case of Mirza Waseem Baig, a journalist from Punjab in Pakistan, who was shot dead at his home by three gunmen.

In Africa, the safety of journalists reflects global trends with 9 deaths in 2019 recorded in the Democratic Republic of Congo (1), Ghana (1), Nigeria (1), Chad (1), Somalia (3), Libya (1) and Zambia (1). Once again, Somalia finds itself heading  Africa's macabre list, with journalists Mohamed Omar Sahal and Hodan Nalayeh murdered in a bomb attack by Islamist Al-Shabaab militants and cameraman Abdinasir Abdulle Ga’al killed in an attack on a military base in the Shabelle region.

For the second year in a row, the Middle East and the Arab world saw a decline in the number of assassinations, with 8 killings in contrast to 20 deaths in 2018 and 25 in 2017. The IFJ reports deaths in 2019 in Iraq (1), Syria (5) and Yemen (2) and deplores the lack of security in the region as thousands of journalists have been forced to leave their homes or countries because of their reporting. For more than 10 years the IFJ has been organising safety training for its affiliates in the region.

In Europe, two journalists were killed in 2019: Lyra McKee, shot while covering a riot in Derry, Northern Ireland, and Vadym Komarov, killed following a violent attack by unidentified individuals in the centre of Cherkassy, Ukraine. The Council of Europe Platform for the Protection and Safety of Journalists, to which the IFJ is a regular contributor, also recorded 38 cases of impunity in Europe in 2019, including 14 murders and disappearances of Serbs, Kosovars and Albanians.

Since the launch of the IFJ Killed list report in 1990  the federation has recorded 2,530 deaths of journalists.

The IFJ continues its work to combat impunity by demanding that governments take responsibility for the lack of investigation into the murders of journalists and calls for an International Convention for the Protection and Safety of Journalists. It also welcomed the condemnation at the end of 2019 in the Philippines of those who ordered the massacre of 32 journalists in Maguidanao on 23 November 2009.