IFJ Blog: Kashmir Valley has seen many a lockdown but why this time it is so different 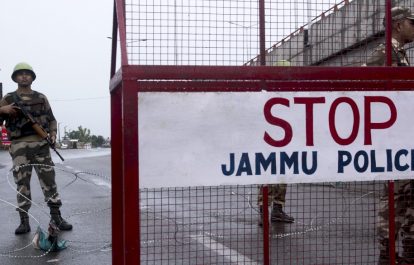 The Kashmir Valley’s connection with the inside and the outside world has been cut — all internet connectivity, cellular, landline, and cable TV services have been snapped.

A question mark the size of the Kashmir Valley hangs over its residents who are under an unprecedented lockdown as security personnel patrol deserted streets, two former Chief Ministers are in detention, one is under house arrest and several activists of major mainstream parties are being rounded up.

So staggering is the sweep of the change scripted in New Delhi and passed by Parliament today, the amendments to Article 370, scrapping the special Constitutional position of Jammu and Kashmir and its reduction to a Union Territory after bifurcation of the state that residents are stunned trying to wrap their heads around what these will translate into

“It’s a huge shock, the feeling is still sinking in,” said a National Conference leader on the condition that he not be named. “There will be a reaction to this unilateral decision… this is the biggest act of disempowerment since the 1846 Treaty of Amritsar (between the British and Raja Gulab Singh) when Kashmiris were sold, along with their land, water and sky over their heads.”

For a place where the weight of history is always heavy, rarely has the future seemed so uncertain.

The Valley’s connection with the inside and the outside world has been cut — all internet connectivity, cellular, landline, and cable TV services have been snapped. Residents are not allowed outside their neighbourhoods. The administration hasn’t issued curfew passes to even its own employees and security personnel don’t accept government IDs as passes.

The press isn’t welcome. Most of the TV crew that have flown in are parked in a 1-sq-km area of Zero Bridge in the city. There is some easing of security here, on the road to the airport and the Rajbagh-Jawaharnagar stretch — this is the one that visiting TV cameras film. Elsewhere, roads are barricaded with spools of concertina wire and regular checkpoints with police and armed paramilitary personnel on patrol. Most police personnel are equipped with lathis, not guns.

Across the river, at Jehangir Chowk, a journalist was roughed up by a police officer trying to film the curfew.

For the past two days, The Indian Express reporters have been holed up in their office from where they walk around to meet residents and then return. In the office building itself, dozens of policemen have moved in, the corridors their temporary shelter. For, space is short — most government buildings, schools, colleges, courts have been occupied by paramilitary forces flown from outside the state. On Tuesday, half a dozen busloads of Border Security Force personnel came from Rajasthan and they moved into an empty parking lot in the city centre.

The Indian Express spoke to several residents including government employees and policemen. Signalling deep distrust and anger, an overwhelming majority of them fear that the reorganisation of the state is aimed at “changing the demography of Jammu and Kashmir with an aim to reduce the share of Muslims in the population.”

“We know what they are up to,” said a 30-year-old man from Abi Guzar in Srinagar who didn’t want to be identified. “This will first come in the name of investment.”

While the chorus among separatists is “we-told-you-so,” the entire pro-India political ecosystem is rattled.

“This government has undermined those Muslim voices here who not only disagreed with their own people and even shed their own blood because they believed in a secular India and wanted the state to be part of that secular India,” a leader of the Peoples Democratic Party said. “There is nothing left for these (mainstream) parties now. From National Conference to newcomer Shah Faesal, they are all in the same boat”. Many in the Valley say they are expecting mainstream politicians to stand up to this “challenge” and forge a unity for a “joint resistance.”

“The argument that kept them alive for the last 70 years is in pieces within 15 minutes in Parliament,” said Mohammad Umar, a student at Kashmir University. “They have nothing to say. Their only way forward is to apologise to people and stand up.”

Said a National Conference activist, whose father was killed by militants: “My father died for the idea of India and I joined mainstream politics for this idea. He took militant bullets because he thought Kashmir is safer with secular India. After this, I question his and my wisdom. If we (mainstream) don’t stand up against this, I will have to decide about my political future.”

A senior PDP leader told The Indian Express that leaders of four political parties had an informal meeting. Calling the move to reorganise the state a “Constitutional fraud,” he said: “There is no sanctity of the Instrument of Accession. Our participation in elections will be signing our own death sentence. There is a growing feeling that the only way forward at this moment is to start a joint resistance.”

“First, the NIA, Enforcement Directorate and other agencies were used to harass and intimidate separatists. We thought they are doing it to purge the separatists,” the leader said. “We didn’t know they will come for us too, those who have held the Tricolour for the last 70 years, those who were true Indians in Kashmir.”

Roads are closed, many ATMs are without money, fuel stations are shut and daily essentials are drying up across homes.

At Nowgam, a 22-year-old man was hit by a speeding vehicle. A Maruti van driver picked him up and rushed him to Shri Maharaja Hari Singh (SMHS) hospital. “We were stopped at every checkpoint and not allowed to move forward. After pleading with them, they allowed us to move ahead,” said the driver of the vehicle. “It took us two and a half hours to reach here (Jehangir Chowk)”. The vehicle was stopped at Jehangir Chowk and not allowed to move forward. An ambulance came and shifted the patient but not before he died.

Many professionals and students who were in the Valley for the summer vacation and in anticipation of Eid are finding it hard to return. As the net is down, they can’t book air tickets and only way out is to reach the airport. But the airport road is barricaded every 300 m and people are not allowed inside the airport premises without a valid air ticket. Srinagar Deputy Commissioner Shahid Choudhary’s office is shut to persons asking for curfew passes.

“This is the prescription from SMHS hospital and we need to reach there but they are not allowing me,” said a Srinagar resident from Rajbagh. “The government cites Section 144 but how can that be a reason for not being allowed to go to a hospital? We are asked to fetch curfew passes but we can’t reach the DC’s office.”

Sure, the Valley has seen many a strike, many a curfew, but this time there’s no escaping the difference — with neighbourhoods locked away from each other, too, Kashmir has been turned invisible even inside Kashmir.

This article was originally published by The Indian Express, written by Muzamil Jaleel, Bashaarat Masood and Adil Akhzer, published on August 7, 2019.

Read the article in Bengali here