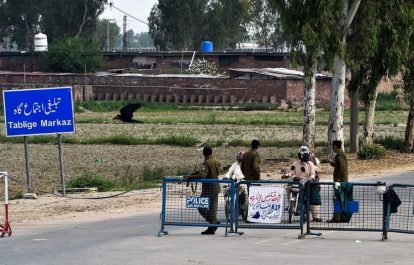 The rapid spread of Covid-19 is creating challenges for journalists covering the health crisis in Pakistan, writes Lubna Jerar Naqvi.

The first news of coronavirus made its way into the Pakistani media in the last week of January 2020, when four Pakistani students, studying in Wuhan, posted a video. The video, filmed by the students, showed a city in lock-down with the students begging to be evacuated.

The video was shared on social media but views were largely limited to other students in the besieged city desperately asking to the government to bring them home. This news remained on the fringe of the usual political stories in news bulletins. Wuhan was considered far away and coronavirus was not big news at the time.

By March, infected Pakistanis began pouring into the country, returning from pilgrimages to Saudi Arabia and Iran. It was only then that reporters began covering the health crisis.

At that time, several journalists contacted me asking how they should ensure their safety as their media organizations were not providing them personal protective equipment (PPE).

My advice was simple. I told them they must ask for PPE since their health and lives are the priority. I also suggested they should source their own masks and use hand sanitizer.  Given the contagious nature of coronavirus, I advised them that they also had the option of refusing to cover stories if they were not given masks.

But given the chaotic state of the media in Pakistan, many of the reporters continued to report, regardless of whether or not they had PPE.

For the first two weeks of March, most reporters were in the field without protective gear. Media organizations had not yet provided them equipment or provided any kind of guidelines on how to report during the pandemic.

It was only when the Pakistan Federal Union of Journalists (PFUJ) and the Karachi Union of Journalists (KUJ) intervened did hand sanitizers begin appearing at building entrances to media offices and in some newsrooms. But that was the extent of early ‘precautions’ taken by the media organizations.

By mid-March it was evident things were not improving. Then several media organizations, realizing the severity of the crisis, provided reporters with masks. There were also media organizations that decided to send the majority of staff home to work remotely. News anchors, talk show hosts and newsroom teams are the only ones working from the office.

There are reports of three media workers in the northern province of Punjab who have tested positive. It is likely that there are more cases but media organizations and the authorities have not conducted tests to ascertain the actual numbers of cases media workers infected.

Apart from the IFJ, several other organizations like the Coalition for Women in Journalism (CFWIJ) have shared guideline https://dailytimes.com.pk/583991/cfwij-launches-covid-19-resources-for-journalists-and-newsrooms/ and Association of Electronic Media Editors and News Directors (AEMEND) have issued guidelines and safety protocols for the media.

The initial chaos and lack of PPE for journalists reveals the lack of training and understanding of covering such a pandemic in Pakistan. It is clear that, with a lack of safety guidelines and protocols to protect journalists and media workers, the media in Pakistan were disturbingly unprepared to cover this deadly outbreak.

Lubna Naqvi is a journalist with Geo News Network and Joint Secretary of Karachi Union of Journalists (KUJ).