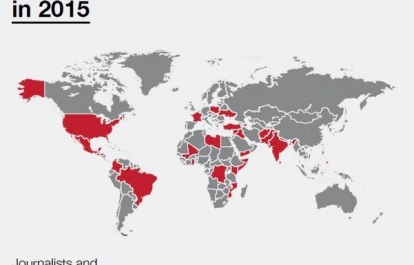 2015 has been another deadly year for journalists, with at least 109 journalists and media staff killed in targeted killings, bomb attacks and cross-fire incidents, according to the annual report published today by the International Federation of Journalists (IFJ).

The IFJ 2015 list names the 109 journalists and media staff killed across 30 countries, together with 3 who died of accidental deaths. It marks a small drop from last year when 118 killings and 17 accidents were recorded.

This year, the killing of journalists in the Americas topped the toll, at 27 dead. For the second year in a row, the Middle East comes second, with 25 deaths. Asia Pacific comes third, with 21– a drop on last year due to the big fall in violence in Pakistan. Africa is in fourth place with 19 dead, followed by Europe with 16.

2015 was marked, in particular, by an increase in targeted terrorist attacks against journalists. French journalists paid a disproportionately high price when terrorists gunned down media workers at the French satirical magazine Charlie Hebdo in Paris. In the United States, the killing by a disgruntled ex-employee of two former colleagues at US TV WDBJ in Virginia took place in front of a global TV audience during a live transmission.

“I reiterate once again my call to UN Secretary General Ban Ki-moon and the heads of UN agencies to enforce international laws protecting journalists. The attacks in Paris shocked the world and put on the world stage the tragedy of the drip-drip slaughter of journalists worldwide, which are today the only professional group that pays so dearly for just doing the job,” said Jim Boumelha, IFJ President.

“Sadly, there were scores of unreported killings and unless the journalist is a well-known by-lined correspondent the world barely notices. Journalism is put daily to the sword in many regions of the world, where extremists, drug lords and reckless warring factions continue murdering journalists with impunity.”

In the Middle East, the IFJ has recorded an escalation of violence targeting media professionals by extremists in Iraq and Yemen, where there was a spike in killings and kidnappings, mainly of local journalists covering their cities, communities and countries.

In Latin America, the killings are mostly at the hands of drug lords who operate across borders, particularly in Mexico, putting journalists who investigate drug trafficking in the region at greater risk.

In the Asia Pacific, the IFJ has witnessed a spiraling climate of hostility toward media workers in the Philippines that has seen 7 journalists killed across the country and makes Philippines the deadliest place in the region. The Federation is particularly concerned over the state of impunity that surrounds killings of media workers in the country.

The Federation, which will publish its 25th full report on journalists and media staff killed in January 2016, says the momentum in recent years to promote greater media protection must lead to genuine steps to curb violence on media professionals. The Federation is urging the UN to take concrete measures through its Action Plan for the Safety of Journalists and take a strong stand against impunity for crimes targeting journalists. The Federation ran a three-week campaign this year to hold governments accountable for the lack of investigation of crimes against journalists, which leads to the erosion of freedom of expression across the world.

The Federation has also been one of the main initiators of the Council of Europe’s Online Platform for the Promotion of Journalism and the Safety of Journalists, which has now become one of the most trusted observatories to record violations of journalists’ rights across Europe, with a view to promoting their safety.

“The IFJ reports over the last 25 years have clearly shown that journalists and media staff have become easy targets because there is very little respect for national and international laws that are supposed to protect them,” added Anthony Bellanger, IFJ General Secretary. “The current levels of violence against media workers have served as a wake-up call. They have opened a small window of opportunity to take drastic action to enforce these legal provisions, which should not be missed.”

As of 31 December 2015, the IFJ has recorded the following cases of killings:

Among countries with the highest numbers of media killings are: