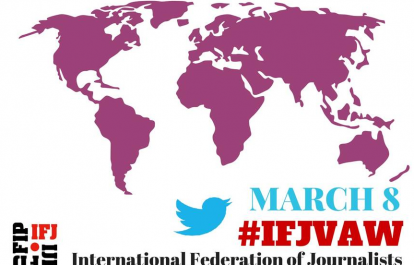 The International Federation of Journalists (IFJ) and its affiliates have begun a campaign of gender action and discussion aimed at recognizing the vital role of women in the media and the need for rights and representation in decision-making roles in both the media and unions. The campaign started with the launch yesterday of a special series of country reports from across the Asia-Pacific region exploring “media through a gender lens” to mark International Women’s Day (IWD).

Seven country reports from Cambodia, India, Malaysia, Nepal, Pakistan, Sri Lanka and Vanuatu detail the experience of men and women journalists at work and in their unions, highlighting some commonalities as well as individual issues and areas of concern in each country. See release of key issues here.

Together, they are part of a wider project, ‘Gender and Media in the Asia Pacific’, which will be launched shortly together with UNESCO and UNWomen. The IFJ report identifies key challenges for women in the media across the region and includes recommendations for governments, unions, civil society, non-government organisations and media organisations.

Already, the country reports identify a number of key themes for action including more women in decision-making roles, equal pay for equal work, zero tolerance for sexual harassment and recognition of the importance of family-friendly work conditions.

The IFJ globally has also launched a campaign calling for access to leadership in unions and media organisations for women so that they can play a full and active role in society. It has also reiterated the need to confront violence against female journalists by providing them with a safe working environment in media. Read more about the global campaign here.

Around the region, IFJ affiliates have begun their own campaigns and actions on women in the media.

The IFJ Asia Pacific deputy director, Jane Worthington, said: “International Women’s Day serves as a reminder to everyone that the role of women in society is undervalued. The media has a duty to represent that voice from within and beyond. For women working in the media, challenges such as cultural stereotypes, sexual harassment and poor working conditions are barriers for women joining the profession. This leaves important stories untold.”

To advise the IFJ of your campaigns and actions please email alex.hearne(at)ifj-asia(dot)org or ujjwal.acharya(at)gmail(dot)com.