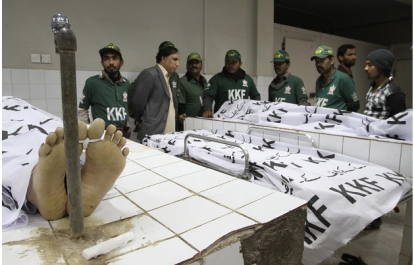 The International Federation of Journalists (IFJ) and the South Asian Media Solidarity Network (SAMSN) have joined the Pakistan Federal Union of Journalists (PFUJ) in marking November 2 as a National Day of Action Against Impunity in Pakistan.

Today, which also marks the first UN International Day to End Impunity of Crimes Against Journalists, the IFJ and SAMSN have written to Pakistan’s Prime Minister, Nawaz Sharif, calling on him to recognize the day in Pakistan and to make concerted efforts to bring to an end to the country’s entrenched culture of impunity for journalist killings.

This year, 13 journalists and media workers have been killed in Pakistan and many more threatened, intimidated and attacked. According to SAMSN, Pakistan is fast becoming the deadliest country for journalists, leading the world in killings this year – ahead of Iraq and Syria.

The SAMSN/IFJ letter outlines how “over the past decade, Pakistan has consistently been raked one of the most dangerous places on the planet to practice journalists. Nearly 60 journalists have been killed in the last six years and more than 100 since 2000. However, murder is not the only form of impunity in Pakistan. Threats against journalists run rife across the country. There have been a number of threatening calls made to notable journalists, including PFUJ Lahore-based President Rana M. Azeem”.

“The Pakistan State and its justice system has consistently failed to provide protection or justice to the journalists and their families though in one lone case they have managed to identify and convict the killers of Wali Khan Babar, whole attackers were identified and convicted but who still remain at large, yet apprehended. This situation must change and urgent steps are needed by the Government, the media sector and the civil society to reverse this tide.”

The joint letter, also signed by leading Pakistani journalists and activists, calls on the Pakistan Prime Minister to respond to a list of eight recommendations:

The IFJ Asia Pacific acting director Jane Worthington said: “The astounding number of journalist killings this year in Pakistan is a shocking and tragic testament of the reality facing media workers in Pakistan. Each time a journalists’ life is lost, press freedom is weakened and this is further exacerbated when the perpetrators go unpunished.”

“This day is reminding Pakistan and the world that journalists do matter. They have families who love them; they are mums and dads, ordinary people. But for every reporter threatened, for every life extinguished, democracy also suffers the ultimate price.”