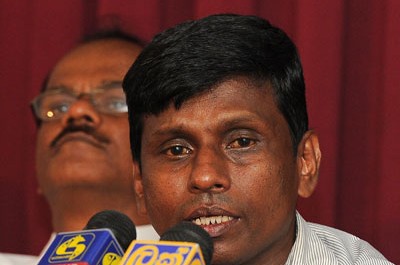 The International Federation of Journalists (IFJ) and the South Asia Media Solidarity Network (SAMSN) join the Sri Lanka Working Journalists Association (SLWJA) in strongly condemning the death threats issued to Sunil Jayasekara, the convener of Free Media Movement (FMM) over recent days. The IFJ has also questioned the role of government agencies in sabotaging a media workshop in Colombo during the weekend and called on the Sri Lankan government to probe these serious threats against Mr Jayasekera as an utmost priority or risk further regional and international condemnation on its human rights record.

Jayasekara has received continuous death threats from anonymous numbers since the FMM hosted a media conference to condemn the role of government agencies in cancellation of a workshop on digital media security for journalists of Jaffna last week.

The IFJ said: “We take any threat on a journalist’s life in Sri Lanka extremely seriously and remain deeply critical of the climate of impunity in Sri Lanka that continues to put media workers and activists’ lives in grave danger. The world is watching Sri Lanka for these very reasons, the threats and intimidation cannot be tolerated.”

The IFJ and the SAMSN last week noted that the continuous assaults, threats, harassments, unwarranted questioning, and restrictions on access and interference by the military with journalistic functions in Sri Lanka and condemned the special directive issued by the NGO Secretariat, functioning under Defense Ministry of Sri Lanka that seeks to control and curb activities of the non-governmental (NGO) sector from holding media briefings and conducting trainings for journalists.

The same day the SAMSN issued its statement on July 25, the Sri Lankan army at the Omanthai Military Check point detained the driver of a vehicle carrying 16 journalists to Colombo for training that evening. The driver and journalists were handed over to police for allegedly possessing cannabis – an allegation refuted by Sri Lankan activists who have claimed the drugs were planted.

The driver was not released but the journalists were allowed to leave the police station in early hours of July 26. The journalists traveled to Colombo to the news that a group had threatened to storm the Sri Lanka Press Institute building if the training went ahead. The organizers, including the Jaffna Press Club, then abandoned the workshop.

The media activists, including the FMM, scheduled a press conference to condemn the incident later on July 26. Jayasekara started receiving anonymous calls from hidden number threatening his life should the conference be held.

Jayasekhara told the press conference: “In a threatening and clear voice, I was told that if the FMM go ahead with this press conference they will not allow me to live. The voice said clearly that I would be killed.”

He further added: “Sri Lanka human rights activists and independent journalists have been living with these kinds of threats for many years now. We know the situation is dangerous and the gravity of these threats.”

The SLWJA general secretary Ranga Jayasuriya said in a statement: “The SLWJA sees the familiar pattern of intimidation that has been unleashed by the government and its military apparatus in the past. We condemn this latest incident in the strongest term and stand in solidarity with our colleagues.”

The SLWJA added: “We call upon the government to abandon its not so covert modus operandi that is put in place to intimidate the press and media activists. Those acts continue to vindicate the hollowness of the government’s commitment to democracy and fundamental rights enshrined in the constitution.”

Three training workshops for Tamil journalists have so far had to be abandoned in 2014.

The IFJ said: “We are deeply concerned by the death threats unleashed to Sunil Jayasekara which is a serious violation of his human rights. The death threats should be taken very seriously given the fragile security situation for journalists and activists in Sri Lanka.”

The IFJ added: “We urge the Sri Lankan government to immediately probe the incidents and immediately stop the harassment of journalists, especially Tamil journalists and call on Sri Lanka’s state to adhere to the human rights and democratic principles it is bound by.”

More than three dozen murders since 2006 in Sri Lanka point out to the deadly situation for journalists, while many media institutions have been bombed and burned, forcing many in the profession to flee the country. Not a single perpetrator has been brought to justice.

The IFJ and SAMSN stand in solidarity with IFJ affiliates SLWJA and FMM, and all journalists of Sri Lanka and calls on the region’s journalists to send messages of support.