IFJ, UNESCO and UNWomen release report on women journalists across the Asia Pacific 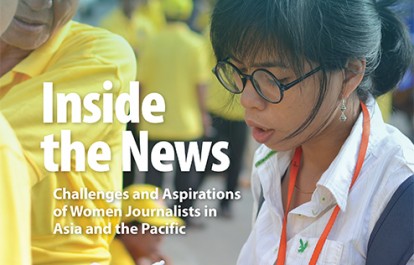 Today, the International Federation of Journalists (IFJ), UNESCO and UNWomen, released Inside the News: Challenges and Aspirations for Women Journalists in Asia and the Pacific. The report documents the issue of Gender Equity in the Media Industry throughout the region, as well as what can be done to maintain and protect it.

While Women working in the media throughout the Asia Pacific face a number of challenges, both internally and externally, substantial gains have been made to the role and positions they play throughout the media landscape. Women are challenging traditional notions of journalism and what it means to work in the media industry, carving their own path to ensure their voices are heard and their stories are told.

The reports works as a starting point for an important and much-needed discussion on the vital role media plays in leading and influencing change within its own industry as well as in the representation of women and gender issues more generally. The report details the experience of Journalists across seven countries in the Asia Pacific, including Pakistan, India, Nepal, Sri Lanka, Malaysia, Cambodia and Vanuatu.

The research highlighted that across the region, women remain underrepresented in decision-making roles in media organisations and in unions and that currently, only 3 in 10 media staff are women. Working conditions are improving, but 98 percent of respondents still do not have access to childcare in their workplace. Sexual harassment also remains a key issue for women, with 17.8 percent saying they have personally experienced it and 59 percent claiming that these perpetrators were superiors at work. However research shows that the occurrence of sexual harassment cases are on the decline, with the younger respondents recording lower levels of exposure.

The report highlights commonalities across the region in terms of the issues and challenges faced by the women involved, yet each of the seven countries assessed demonstrated different approaches taken by female respondents in order to make their mark in the media industry.

The IFJ deputy director, Jane Worthington said at the launch: “This report is important and provides significant research which provides in depth details of women’s experiences at work: from sexual harassment to representation to pay gaps issues, while providing practical and effective suggestions for change. This report should inspire an industry wide commitment to fulfilling the goal of gender equity in our media, for the benefit of all society. The IFJ looks forward to working with our affiliates on rolling out the necessary changes across the region.”