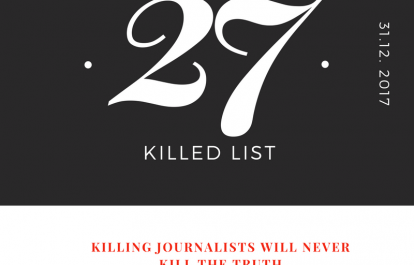 The International Federation of Journalists (IFJ) today warned there is no room for complacency despite recording the lowest number of killings of journalists since 2007.

The IFJ welcomed the fall from last year’s tally of 93 to 81 in 2017 but cautioned that unprecedented numbers of journalists were jailed, forced to flee, that self-censorship was widespread and that impunity for the killings, harassment, attacks and threats against independent journalism was running at epidemic levels.

The IFJ’s Killed List, published today, details the 81 journalists and media staff killed in targeted killings, car bomb attacks and cross fire incidents around the world during 2017. The number is 12 down from last year’s death tally of 93, making 2017 among the least deadly in a decade.

The IFJ welcomed the drop in loss of life among journalists and media staff, partly due to there being fewer flash points in previously highly volatile places and partly to the loss of ground by some armed groups which reduced journalists’ proximity to the frontline in combat zones.

In Yemen, until the split between former President Saleh and the Houthis rebels , there was a stalemate in the ground fighting between warring factions for most of the year and journalists were less exposed to attacks and risks, including crossfire incidents. In addition, the so-called Islamic state (IS) spent the year on the defensive in Syria and Iraq, further reducing the extent of their proximity and contact with media professionals in areas previously under IS-control.

But the IFJ warned against complacency. IFJ General Secretary Anthony Bellanger said: “We welcome the fact that this year has been the least deadly in a decade for journalists but there is no room for complacency. In Syria, Mexico and India killings continue at frightening levels, more women journalists have been murdered, impunity for killings still runs at over 90%, self-censorship remains widespread and more journalists are in jail than at any time in recent years.

“In the face of this increasing targeting of media workers, the IFJ is committed to strengthening its work with unions around the world to deliver more safety training, affordable insurance for local journalists who bear the brunt of the attacks and above all a commitment to campaign actively for those who attack journalists – be they state actors, paramilitary organisations or corporate interests – to be brought to justice”.

“We welcome the reduction for the third year in a row in the loss of life suffered by journalists and media staff around the world during 2017,” said IFJ President Philippe Leruth. “While this represents a downward trend, the levels of violence in journalism remain unacceptably high. We find it most disturbing that this decrease cannot be linked to any measure by governments to tackle the impunity for these crimes targeting journalists. Instead, the patterns don’t change in the most violent countries such as Mexico and India.”

Media remain in the grip of extreme violence from insurgents in Afghanistan and the ruthless reign of organised crime groups in Mexico. There is also a growing concern about attacks on journalists motivated by violent populism in India, the world’s largest democracy. This intolerance led to the high profile killing of Gauri Lankesh, a prominent woman journalist who was well known for her independent reporting.

No region was spared the scourge of violence in journalism in 2017, including Western democracies where men of violence proved the lengths to which they are prepared to go in ensuring their criminal enterprises remain shielded from media scrutiny. Two women journalists, Kim Wall of Denmark and investigative journalist Daphne Caruana Galizia of Malta paid with their lives their pursuit for the truth. Together with Gauri Lankesh, they were among the eight women journalists killed in 2017.

Faced with this grim reality, the IFJ renewed its commitment to lifting the shadow of violence on journalism through addressing impunity by proposing a new international convention on the safety and independence of journalists and other media professionals. The Convention would seek to provide a more effective international means for journalists and others to challenge the lack of action by governments on tackling impunity and bringing the killers of media workers to justice.

“The safety crisis in journalism does not allow the status quo and there is a desperate need for a new instrument which would finally make possible the implementation of numerous existing resolutions on media protection,” added IFJ General Secretary Anthony Bellanger. “We urge the adoption of this new convention to sustain other on-going efforts to further promote the safety of journalists.”

According to IFJ records, the Asia Pacific has the highest killing tally with 26, followed by the Arab World and Middle East on 24 killings, The Americas with 17, African still at eight and Europe with five killings.

As of 29 December 2017, the IFJ has recorded the following cases of killings: