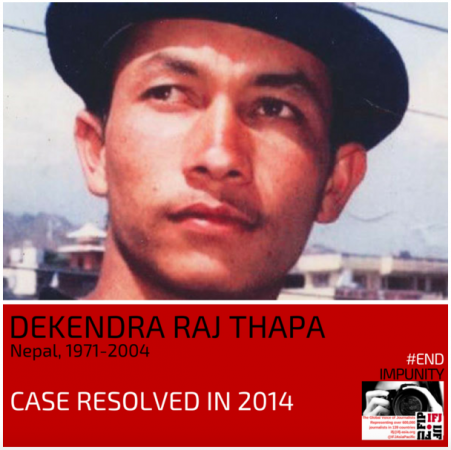 Dekendra Raj Thapa was a fearless journalist working for state-run Radio Nepal in Dailekh district in western Nepal. During the height of the armed conflict between the Maoist rebels and the monarchy, on June 23, 2004, he was abducted by the Maoists from Channa Bazar. Thapa and other journalists had gone to meet the rebels with a request to resume water supply after the Maoists had blocked water pipes. The thirty-three-year old journalist was hung upside down and beaten for days before he was buried alive on August 11, 2004.

The Federation of Nepali Journalists (FNJ) sent a mission team as soon as it became evident that he was captured by the Maoist, but news of his murder started pouring in before the mission team could reach Dailekh. Along with a strong statement, the FNJ warned the Maoists that they would make a call to blackout news about the Maoists if the leadership did not make his whereabouts public before the FNJ Central General Assembly in Biratnagar in 2004. The spokesperson for the Maoist party issued an apology stating that the act was not a party decision and that action would be taken against those involved. The FNJ in coordination with the National Human Rights Commission (NHRC) got Thapa’s body exhumed in 2008 after a villager had identified the suspected burial site in Dwari in Dailekh district.

Prosecution against all odds

The conflict ended in 2006 with the signing of a peace accord and in 2008, Dekendra Thapa’s wife Laxmi Thapa lodged a case with the Dailekh police. It was years before the police took action, with the Maoist leadership attempting quash the investigation, terming it a conflict era case which should come before the Truth and Reconciliation Commission. The then Prime Minister Baburam Bhattarai even described the investigation as one that could destabilise the fragile peace process. Investigation was suspended when theAttorney General of Nepal, Mukti Pradhan ordered the probe to stop in January 2013. Following a writ petition filed by the Democratic Lawyers’ Association and Nepal Press Union seeking court intervention, the investigation resumed. As the case proceeded, other journalists in Dailekh district were also threatened by Maoist cadre, and had to flee the district until the Home Minister intervened and assured them of security.

On December 7, 2014, the Dailekh District Court awarded punishment to the five accused ranging from imprisonment of one and a half to two years. Although the sentence is light, and the prime accused is still at large, the sentencing is a significant victory for journalists against impunity in Nepal.

The case was taken to prosecution due to relentless struggle from his family, which was supported all the way by the FNJ. The FNJ not only supported his wife to get a job, but also organized a charity football match between the national champion club and all-star team to raise funds for the education of his daughters. The match, inaugurated by Thapa’s daughters, was also a part of the campaign to raise public awareness to fight for justice for the slain journalist.

“The prosecution in Dekendra Thapa’s case is an important landmark in FNJ’s history and transitional justice in Nepal,” Dr Mahendra Bista, the FNJ president said. “Such cases were either not investigated or taken to court or even if taken to court, political unwillingness impeded the process. It also boosted the confidence of the FNJ, that with relentless effort and commitment, a dent in impunity can be made. The success was achieved due to continuity in local, national and international voices for justice.”

The verdict represents tiny steps on the long road to dismantling impunity and establishing press freedom, and a measure of reparation for the family of Dekendra Thapa, who, ironically, was born on May 3, now observed as annual World Press Freedom Day.