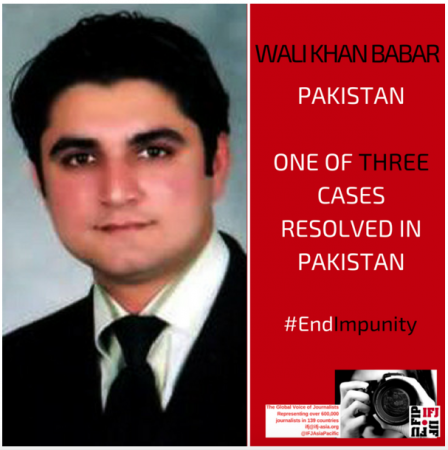 Wali Khan Babar, 28, a journalist with Geo New TV, was shot dead in the Liaquatabad area of Karachi on January 13, 2011. When he was driving home from work, Babar’s car was intercepted by armed gunmen who pumped about five bullets into his head and neck. Eye witnesses said that one of the assailants spoke to Babar before shooting him in the neck. His murder is believed to be a targeted killing on behalf of Karachi-based political party, the Muttahida Qaumi Movement (MQM), the fourth-largest political party in Pakistan. Babar’s forceful reportage of violent political turf wars, riots, extortion, targeted killings, electricity theft, and land-grabbing is believed to have prompted the move to eliminate him. Wali Khan Babar’s killing was condemned by then President Zardari and senior politicians, and country-wide protests were declared by the Pakistan Federal Union of Journalists (PFUJ), the Karachi Press Club and other journalist bodies.

Wali Khan Babar, an ethnic Pashtun from the town of Zhob in Balochistan, left behind a widowed mother, three sisters and four brothers, who relentlessly pursued their quest for justice and continue to demand that the real masterminds behind the killing be apprehended.

The case hit many road blocks as five witnesses of the murder – two policemen, a brother of one police officer and an informer – were also shot dead one by one, within weeks of Babar’s killing. The prosecutor in the case, Naimat Ali Randhawa, was also killed. While investigations were underway, the original prosecutors in the case, Muhammad Khan Buriro and Mobashir Mirza were threatened. When they were subsequently dismissed, they fled the country for their own safety. The involvement of high level politicians was suspected, and a Joint Investigation Team report said that the killing had been ordered by Agha Murtaza, a South Africa-based MQM operative. Fearing political pressure on the investigation and legal case, the provincial government filed an application in the Sindh High Court appealing for the case to be transferred to Shikarpur to reduce the security risk to witnesses and others involved in the case. The request for transfer was granted and the case was allowed to proceed.

The seven accused were tried for murder under Section 302 of the Pakistan Penal Code, Section 34 of the Pakistan Criminal Procedure Code (acts done by several persons in furtherance of common intention) and Section 7 of the Anti-Terrorism Act 1997.

On March 3, 2014, an anti-terrorism court (ATC) convicted Naveed Polka, Muhammad Ali Rizvi, Faisal Mahmood, and Mohammad Shahrukh Khan to life imprisonment, and awarded death sentences in absentia to two of the accused: Kamran alias ‘Zeeshan’ and Faisal Mehmood alias ‘Mota’ who still remained at large. One of the accused was acquitted. This was the first conviction in the case of murder of any Pakistani journalist. The subsequent arrest of the two absconding convicts ‘Zeeshan’ and  ‘Mota’ from ‘Nine-Zero’, the MQM party headquarters on March 11, 2015 by the paramilitary Rangers made their political links amply clear. The party however has denied this and claimed that their arrest was made nearby and not from the premises of ‘Nine Zero’.

According to Amin Yousuf, former General Secretary, Pakistan Federal Union of Journalists (PFUJ ), the Wali Khan Babar case is a landmark in the fight against impunity. “Usually when a journalist is murdered their stories seldom make it beyond the headlines. Their own fraternity usually is too busy – or hapless – to follow leads and clues that could pin down the perpetrators. Instead of finding justice for slain journalists, these murders usually sink into the abyss of statistics only to be retrieved on special occasions like World Press Freedom Day or International Day to End Impunity.

“Those responsible for the murders seldom get caught, let alone punished for their deeds. The situation was equally grim in Pakistan where scores of journalists have become victims but their stories are never followed up, until recently when for the first time in Pakistan, we saw a conviction in the murder case of reporter Wali Babar. In a country which is considered by international watchdogs to be one of the most dangerous for journalists – scores of journalists have become victims of violence and terrorism – Wali Babar’s case has set a new precedent. It is hoped that this case will help to break through the impunity that perpetrators enjoy when journalists are murdered.”

Meanwhile, Faisal Mehmood ‘Mota’ in April 13, 2015, filed an appeal in the Singh High Court challenging the sentence of death awarded to him. The other convicts too have filed appeals in the Sindh High Court.

Whatever be the outcome of the appeals, the conviction of those accused of murdering Wali Khan Babar mark a significant moment in challenging impunity. However, for justice to be truly served, the masterminds behind Wali Khan Babar’s murder must be brought to justice.