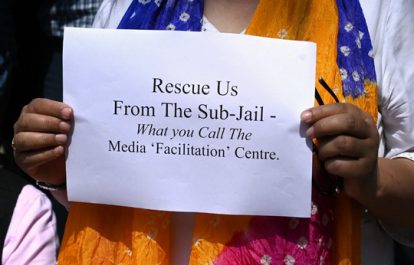 The Supreme Court of India ordered the Indian government to review restrictive orders on internet service in Indian-administered Kashmir on January 10. The International Federation of Journalists (IFJ) and its affiliate the Indian Journalists Union (IJU) welcome the verdict and urge the immediate lifting of the ban in Kashmir.

The IJU said it welcomed the verdict, but noted it failed to reference the impact on press freedom and the ability for journalists to do their work during such a shutdown. The absence of internet and broadband services has meant media has been unable to upload news online. The ongoing shutdown has also triggered widespread job losses and salary cuts.

The IFJ’s Indian affiliate IJU urged Indian authorities to lift the internet and communications shutdown and adhere to the spirit of the Supreme Court order. It also called on the national government to “internalize the SC verdict” to ensure that responsible governments are required to respect media freedom at all times.

The IJU said: “Journalists are to be accommodated in reporting and there is no justification for allowing a sword of Damocles to hang over the press indefinitely’.”

The IFJ said: “It is now crucial for the Indian government to follow the court’s ruling and show a commitment to press freedom in Jammu and Kashmir by removing all internet and communication restrictions immediately.