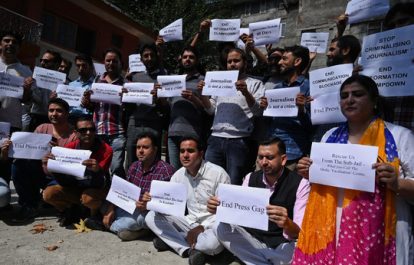 The Indian government is continuing to ignore a Supreme Court ruling that internet services in Kashmir should be re-established. The court ruled on 10 January that the indefinite shutdown was “impermissible” but services remain suspended. The International Federation of Journalists (IFJ) and its affiliate the Indian Journalists Union (IJU) condemn the Indian government’s inaction to restore services.

Media workers remain unable to access essential internet services due to the shutdown which has been in place since August 5, 2019 when India revoked Article 370, ending the partial autonomy and statehood of Jammu and Kashmir.

Four days after the court-ordered review into the internet suspension, on January 14, the Indian government restored 2G mobile services in five out of ten districts of Jammu region and broadband services for hospitals, banks and government offices. On January 18, 153 ‘whitelisted sites’ became accessible over a 2G connection, which was extended to 301 sites on January 24. The whitelisted websites include banking, travel, food and educational services.

Kashmir Press Club (KPC) claimed that the government’s apathy in restoring the internet facility to media organizations was a deliberate attempt to stifle press in the region.

In a statement, the KPC said: “The way the Indian government has not included news websites in its whitelist indicates that it is still against the media, social media and journalists. We would like to remind the government of India to adhere to its duty to ensure press freedom and the right to internet access which according to the Supreme Court is as an integral part of Article 19 (10) (A)”.

The IJU said: “The internet blockade of media organisations and journalists in Kashmir for past 118 days is a deliberate attempt to gag the press. The IJU demands the administration restore this basic facility immediately”

IFJ General Secretary Anthony Bellanger said: “The internet shutdown and misleading announcements stating that internet services have been restored undermines democratic principles of transparency and accountability. The Supreme Court order to restore internet services must be adhered to. We urge the Indian government to remove all restrictions on communications in Kashmir.”