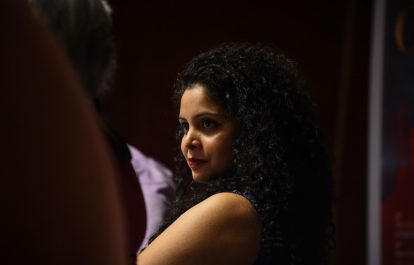 Rana Ayyub’s social media profiles have been flooded with rape and death threats after she wrote posts about a Kashmiri victim killed by the Indian police. The IFJ has welcomed Mumbai police’s decision to start an investigation immediately and have called for action to be taken against the abusers.

On 1 July, Ayyub tweeted that “when it comes to Kashmir, there are no humanists, just convenient nationalists.” The following day, she quoted the wife of Bashir Ahmed Khan, a civilian who was killed by the Indian police. On the same day, she referred to a gruesome picture of the victim’s young grandson, sitting on the bloody dead body of his grandpa. Her social media profiles started being flooded with aggressive and threatening comments, escalating into rape and death threats.

One of the comments said “Remember Gauri Lankesh,” a reference to the journalist who was killed in 2017 in her home in Bangalore after speaking out against right-wing Hindu nationalists. Ayyub also recalls with fear that Lankesh had personally told her that online hatred would not become a threat in real life – three days before she was killed.

Ayyub reported that online hate triggered by posts about Kashmir is “unimaginable,” and that threats are becoming more and more fearless and explicit.

The Navi Mumbai police have launched an investigation. The IFJ welcomed the police’s speedy action, but have also called for more prevention of online harassment.

The IFJ said, “Online harassment is a health and safety issue which is often gendered and sexualized. In two-thirds of the cases, no action is taken against perpetrators. We appreciate that this is not one of these cases, and hope that the Indian government will do their best to protect journalists exercising their freedom of expression on social media.”

The IFJ has been active in giving visibility and support to women journalists who are victims of harassment at work – which, according to IFJ statistics, amounts to an appalling 65%. It has called on governments to adopt ILO Convention 190 against gender-based violence, compiled guidelines for media and unions to counter the phenomenon, and has recently launched the “Online trolling: you are not alone!” campaign.