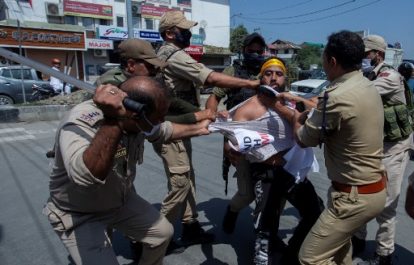 Jammu and Kashmir police chased a group of journalists and attacked them with batons while they were covering the Muharram procession in Srinagar on August 17. The International Federation of Journalists (IF) and its Indian affiliates, the Indian Journalists Union (IJU) and National Union of Journalists – India (NUJ-I) condemn the police’s behaviour and urge the government to bring justice to the guilty police officials involved in this repressive act.

More than twelve journalists, most of them photo and video journalists, were blocked, harassed and beaten up when they were covering the Muharram, a mourning procession conducted by Shia Muslims to mark the martyrdom of the Prophet Muhammad’s grandson. Many journalists were injured and police action resulted in the damage of their equipment. Photos and videos available on social media platforms, including Facebook and Twitter, show that police officers charged journalists with batons while they covered the police’s brutal attack on Shia mourners. One photojournalist, Sajad Hameed, who was thrashed during the procession, said that his leg and camera were broken. The police also threatened journalists by saying that a First Information Report (FIR) may be filed against them. The journalists ran away from the procession to avoid further attack.

Attacks on journalists covering the religious procession and protest are frequent in India. In January more than nine journalists were targeted by police through being arrested, intimidated and charges with criminal offences over reporting and online posts about the farmer protests in India.

The IJU president, Geetartha Pathak, said: “Indian Journalists Union (IJU) condemns the police’s attack on journalists who were merely doing their journalistic duties. The IJU demands an inquiry of the incident and stringent action against the perpetrator.”

The NUJ-I president, Ras Bihari, said: “The NUJ-I expresses gratitude towards DGP and hails his timely action against officers who assaulted a group of Journalists and damaged their cameras. We urge government to take strong steps for protection of Journalists.”

The IFJ said: “Attacking journalists in a bid to prevent them from covering police brutality is an attempt to suppress freedom of the press and  freedom of expression. The IFJ urges the government to take stringent action against the guilty police officials as soon as possible in order to create a safe environment in Jammu and Kashmir for journalists, who are front line human rights defenders.”