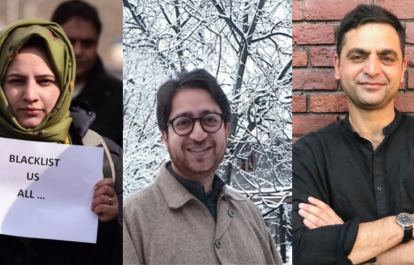 Masrat Zahra, a freelance photojournalist working with a number of different news outlets including Al Jazeera, The Washington Post and The Caravan was summoned by Jammu and Kashmir Cyber Police in Srinagar on April 18. The FIR states Zahra was charged under the Unlawful Activities (Prevention) Act (UAPA) after authorities received information that her social media posts were deemed to “provoke the public to disturb the law and order and to glorify the anti-national activities”. The police did not cite any specific social media posts in their statement.

Masrat is a highly regarded photojournalist who covers women and children in conflict. If found guilty, Zahra could face a fine or a jail sentence of up to seven years.

Cyber Police in Srinagar questioned Peerzada Ashiq on April 19 in relation to an FIR registered the day before concerning his article headlined “Kin allowed to exhume bodies of militants in Barmulla”. The statement from Jammu and Kashmir police on April 18 said, “The details quoted in the news item were factually incorrect and could cause fear or alarm in the minds of the public”.

Gowhar Geelani, a journalist for BBC, DailyO and Scroll.in had an FIR filed against him by Cyber Police in Srinagar on April 21. While the police statement did not specify what law Geelani allegedly contravened, the police statement said Geelani is accused of alleged “unlawful activities including glorifying terrorism in the Kashmir Valley”.

IJU said: “Such action of police against journalists is nothing but a gag on press freedom and the right to freedom of speech and expression.”

IFJ said: “The use of stringent acts like the UAPA to criminalise social media and the press is undeniably an attempt to silence journalists. The IFJ condemns the treatment of Masrat Zahra, Peerzada Ashiq and Gowhar Geelani and urges the investigation, on spurious charges, be withdrawn.”